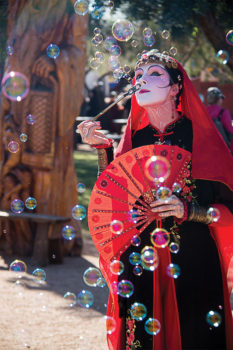 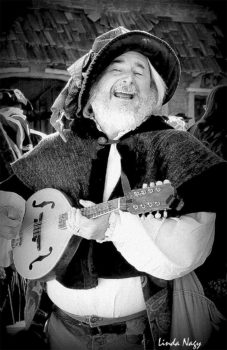 In post-World War II America, there was a resurgence of interest in medieval and Renaissance culture. In the 1950s, there was a strong, early “medieval music” revival that was heard with folk music. Along with the music, hippies dressed in medieval peasant costumes at music gatherings across the states. Although historical reenactments were by no means exclusive to the United States, Europe was trending this way as well. The American variation of the European historic fairs like those held in Kentwell Hall, Suffolk, England took hold in Agoura, California in 1966.

Members had the chance during our photo open studio times to understand the type of photo opportunities and camera settings they might use on our Renaissance field trip. Some are new to SLR photography and some are using the new “mirrorless cameras” and needed a little practice before going out in the field. There are always seasoned photographers who are on hand to help newbies during the Wednesday and Friday mornings 9:00 a.m.-noon, in the Agate Room in SaddleBrooke TWO. The club meets to discuss questions in preparation for the type of photos they could take at our field trips such as the Fair, along with items useful to take, like a monopod. We are also shown videos during these sessions about renowned photographers, camera techniques and composition.

At the Festival the members of the SaddleBrooke Photography Club were able to photograph period-costumed actors. Fairs are known for their amazing costumes. Entertainers and vendors are almost always dressed in garb that is “nearly” accurate historically for their character. Often people dress as fantasy characters. You will find wizards, magicians, fairies, lords and ladies from England and France. It offers photographers more than 30 acres of amazing photos. The entire realm is a medieval quaint village with booths and shops to look through. Of course, there is a place to catch a bite on a turkey leg while you catch knights jousting in the arena. Food is a big draw. There are various ales, sweet honey meads, beers and beverages as well as common soda. There are brats, chicken and steak on a stick, hot pretzels and funnel cakes. Yummm!

“This is our second time at the Renaissance Festival. We had a marvelous time photographing people in their glorious medieval costumes,” said Bernie Nagy, charter member of the club.

“The Renaissance Festival is an event for all ages. It’s like stepping back in time into a 16th century European village. The vendors’ wares, demonstrations, and entertainment are all top quality,” added his wife, Linda Nagy.

“It’s been nearly thirty years since I visited a Renaissance Festival,” said Janet Creagan. “Thanks, SaddleBrooke Photography Club, for organizing this year’s trip. I had a ball photographing some very interesting people and moments.”

“Since joining the SaddleBrooke Photography Club, I’ve really grown as a photographer with the support of enthusiastic and knowledgeable club members,” commented Frank Earnest. “My particular interest is portrait photography, and I’ve received valuable insights about how light and composition can improve my photographs. Our recent club trip to the Arizona Renaissance Festival was both an opportunity to get great photographs and to have fun.”

The SaddleBrooke Photography Club is so much fun! The Renaissance Fair was a highlight for everyone who attended. Well worth the effort to go.