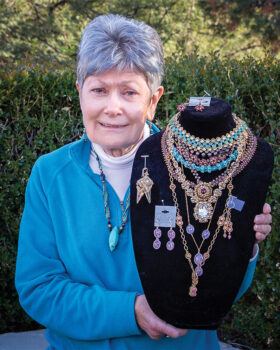 The Gift Shop proudly presents February’s talented artist, Dorothy Krieger. Dorothy was born and grew up in Juneau, Alaska, in a house her father built when Juneau’s population was only about 6,000. Dorothy attended school in Juneau before attending the University of Alaska in Fairbanks. Dorothy held several jobs before going to work for the Alaska State Department of Health & Social Services. She was there for over four years. She held various positions including, teaching, writing manuals, and traveling the state to conduct classes. Dorothy then transferred to the Alaska State Department of Transportation, working in the finance division where she eventually became the accountant for operating and capital funds.

Dorothy met her husband, Ken, while he was working for Alaska’s NOAA Auke Bay Fisheries Research Lab, and they were married in 1982. In June 2005, after choosing Arizona for retirement, they sold their house, boarded the ferry at Skagway then drove the Alaska Highway to Washington State, visiting friends and family along the way. They arrived in Tucson expecting to spend about three months looking for their new home. Three weeks later, they came over the hill and saw SaddleBrooke with the Catalinas in the background. End of search!

Dorothy loves traveling. She’s visited Greece and Italy three times each, Peru twice, and many other countries. A lot of her trips were either organized hiking or birding tours.

Dorothy’s craft is beaded jewelry using seed beads to make various shaped and sized pendants to be worn on a chain or beaded rope; and peyote beads to make cuff bracelets. These are exquisite pieces of art and need to be seen to be appreciated. Dorothy says the largest expense for her craft “is the time invested in creating each piece.”

Dorothy discovered beading at the Tucson Gem Show in 2008. Her tools include needles, beading thread, wire, chains, awls, bead readers, pliers, tweezers, and seed beads along with semi-precious gemstones of all kinds. Rather than just stringing beads or stones, she does bead weaving or stitching with gorgeous results. Turning a pile of beads into “something pretty to be worn” is one of the things she enjoys most.

At first, Dorothy used a corner of the bedroom for all her crafts, however as inventory grew, a room extension was added. She joined the gift shop in 2009 after realizing that she had to do something with her finished pieces in order to have space to continue her craft.

“If you’re bored or have time on your hands—find a creative outlet you will enjoy and it will fill a lot of time,” she said. “SaddleBrooke has many clubs and groups if you need help getting started.”

Dorothy offers her assistance to anyone who would like to learn her craft.

You can see examples of Dorothy’s work at the SaddleBrooke Gift Shop located in SaddleBrooke One, next door to the Fitness Center. Open hours are 9 a.m. to 4 p.m. Monday through Saturday.