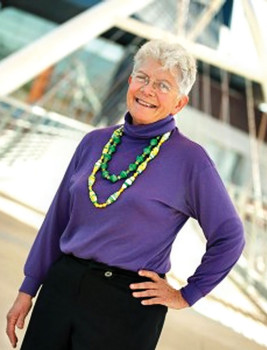 Dianne Post received her J.D. from the University of Wisconsin in 1979. She served as a family lawyer in Arizona for eighteen years, representing mostly battered women and abused children, before beginning a career in international law, primarily doing gender-based violence work including training, drafting of laws and analysis. Post has worked in fourteen different countries, from Eastern Europe to Africa to Asia. She is currently representing Roma IDPs in Kosovo against UNMIK and EULEX and a group of abused mothers and children at the Inter-American Commission on Human Rights against the U.S.

Be sure to come to the February meeting of SaddleBrooke Freethinkers for an insightful program and what’s sure to be a lively Q&A. Mark it on your calendar for Sunday, February 21 starting at 9:00 a.m. at the MountainView Ballroom. (Note the earlier than normal time.)

Future meetings at this time are as follows:

* Climate Change and Experiments at Biosphere 2 with Victor Lim, Jr. on Sunday, March 20, , at 10:00 a.m. in the Activity Center at SaddleBrooke One

* Cognitive Behavioral Therapy with Dr. Ann Vernon on Sunday, April 24, 2016, at 10:00 a.m. in the MountainView Ballroom at SaddleBrooke Two

* Thirdsty Thursdays social gatherings on the third Thursday each month year round at the Roadrunner Grill from 3:00 to 5:00 p.m.

Attendance at the Sunday meetings is free and open to all, regardless of religious belief, political persuasion or gender preference. To defray costs, a contribution of $2 per person is requested. Non-perishable food or cash donations for the Tri-County Community Food Bank are always welcome.

Regular meetings of the SaddleBrooke Freethinkers are usually on the fourth Sunday morning each month, October through April. As our organizational charter states, we “believe in the responsible search for truth and meaning and in the application of reason and science to the understanding of the universe and the solving of human problems. We believe that tolerance, compassion, equity and civility should characterize the interaction among peace loving persons and organizations.” Information about SaddleBrooke Freethinkers, upcoming presentations and past programs is at www.sbfreethinkers.wordpress.com.