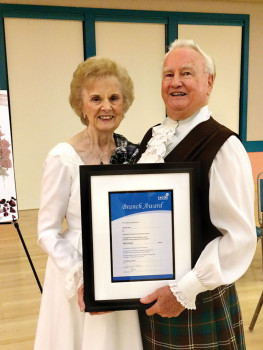 Enid and her husband have been dancing together for more than 60 years now. In addition to Scottish Dancing, they have danced with a performance folk dance troupe doing English, Irish, Russian, Serbian, Greek, Mexican, Hungarian, Ukrainian, Polish, German and Philippine dancing and the group made all their own costumes which were researched for authenticity. Here in SaddleBrooke, in addition to the English Country Dancing, they do Ballroom, Latin and Round Dancing which really keeps them going. Enid had previously done a lot of English Country Dancing in England where she was born and raised and also when Gene taught for a year there when he was awarded a Fulbright Scholarship to teach there. During that year they did performances with a group called English Miscellany and danced with them in England and Sweden and were privileged to attend a 17th Century English Country Dance Ball in the Assembly Rooms at Bath, where some of the dancing in Pride and Prejudice was filmed. Since Scottish Dancing is a little too demanding for SaddleBrooke residents as it involves a lot of hopping and skipping, Enid started an English Country Dancing class here in SaddleBrooke some years ago.

English Country Dancing is done with a lilting walk and is a less strenuous form of dancing, but it is also done in lines, square and circle formations like the Scottish Country Dancing – the music is great and the dances are lots of fun and we have great camaraderie – so why not give us a try and dance off some of those extra holiday calories? We generally meet at the lovely Vermilion Room at SaddleBrooke One on Thursdays from 3:30 to 5:00 p.m. or we may have been moved to the Craft Room 3 near the Gift Shop at SaddleBrooke One if the Vermilion Room is booked for another activity. It’s best to call ahead if you’re coming for the first time so we can let you know.