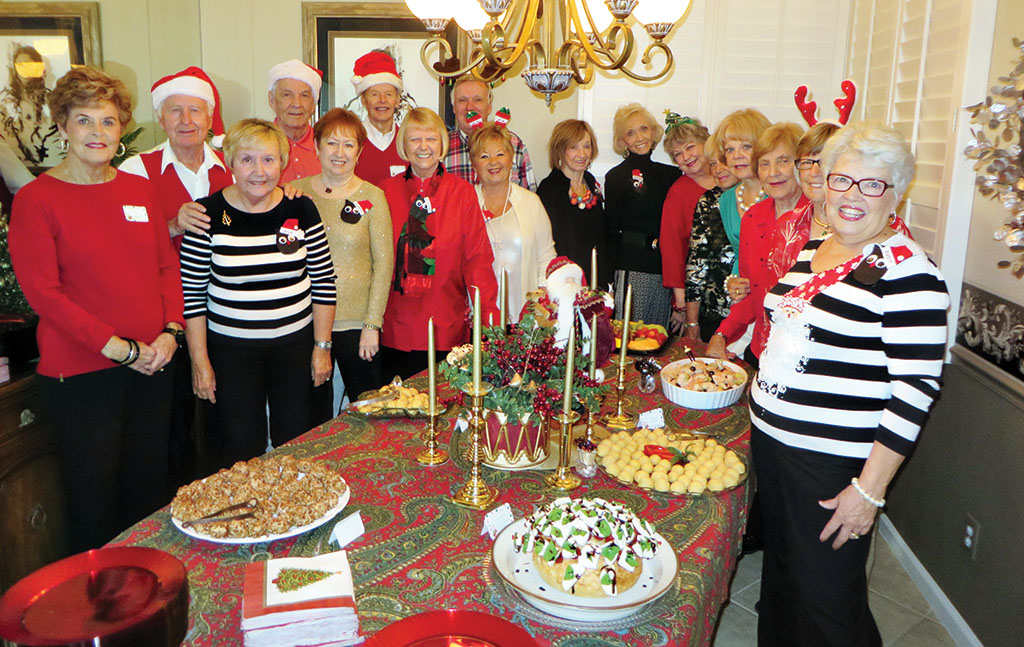 With several of their men helpers behind them, the Old Wise Ladies of Resurrection Church are ready for Cheer, Cheese and Chatter.

A project of the OWLS (Old Wise Ladies) of Resurrection Church has given a big boost to IMPACT in Catalina and provided major assistance to the babies of the SaddleBrooke area. The project, Cheer, Cheese, and Chatter, was held at the home of Sue Birky on December 7 and was attended by well over 100 SaddleBrooke women.

Those attending were asked to bring baby food or a donation which would be used to help “feed hungry Catalina babies.” There was an overwhelmingly generous response. The checks and cash are still coming in, but that number is expected to exceed $2,000. In addition to the cash, diapers, car seats, toys, baby formula and lots and lots of jars of baby food, enough to fill an Impact van, were donated. The baby food, according to IMPACT Executive Director Barbara McClure, would feed the babies of the Catalina area for close to a year.

Cheer, Cheese, and Chatter traces its roots to the 1970s when Sue and husband John lived in Ohio. It was there they envisioned and implemented the project which they later brought to our community when they arrived in 2001. Here they teamed up with neighbors Lauchette and the late Joe Low to provide help to the Catalina area.

A number of men, many of whom wore red and donned Santa hats for the occasion, provided support by serving as gofers. Among their tasks were carrying in treats and baby food, serving drinks and providing golf cart transportation for far away parkers. In addition to John Birky, who labored long hours helping Sue before, during and after the event, the men involved were Win Babson, Charles Dunn, Gene Elliott, Bob Hanson, Stan Hustad and Tom Larkin.

Resurrection Church support for Impact is ongoing and not new. Food collected by the SaddleBrooke congregation during the spring and fall food drives is taken there. It also is a part of the overall main campus Missions effort which supports such ministries as Interfaith Community Services (ICS), Youth on Their Own (YOTO), Primavera Men’s Shelter, Feed My Starving Children, Wycliffe Bible Missionaries, Campus Ministries at the University of Arizona and the Christian Family Care Agency to name a few.

Resurrection Church at SaddleBrooke holds its traditional all-denominational Sunday worship services at 8:30 and 10:00 a.m. in the Vermilion Room of the HOA1 Clubhouse. All are welcome.