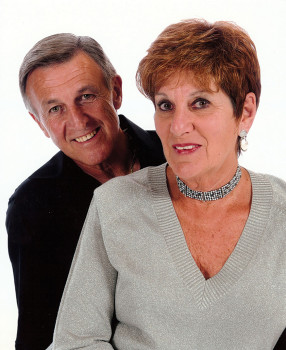 Bev Harpold and Ray Wagner arrived here via the Preferred Guest program, fell in love with SaddleBrooke, moved from Illinois and for the past 18 years have devoted their time to being active in the community. I have known them for all of those 18 years and I am aware of the fact that they are proud and happy to give back. I personally know of thousands of volunteer hours contributed by Bev and Ray. I also know that they have made Bev’s son Doug’s dream of opening and operating a funeral home become a reality!

Bev served as the second president of SaddleBrooke Community Outreach as well as serving in numerous board positions over the years. During her Outreach presidency, the idea of a thrift shop run by volunteers was discussed and with that spark, the Golden Goose thrift shop was born. Bev is one of the more than 400 volunteers at the Goose. This miracle of a store makes it possible for both the Outreach and Impact nonprofit organizations to help children, seniors and families truly in need. Many millions of dollars have been raised in order to accomplish the goal of sincerely making a difference.

Ray was one of the first male members of Community Outreach and was part of an amazing team that helped convert a classroom and turn it into a store for the Kids’ Closet. Kids’ Closet has been giving thousands of children the opportunity to shop for new clothes for school. Ray was also extremely active on the HOA 1 Finance Committee for more than eight years. He served as the chairman for most of those years and helped HOA 1 transition to independent status from the developer. Ray has also spent more than 15 years on the Board of Directors of SaddleBag Notes.

About eight years after moving to SaddleBrooke, Bev and Ray decided to assist son Doug with a project that would help people in dealing with end-of-life issues. Doug had spent eight years as a funeral director in Illinois. The family researched this region and then put much care and compassionate thought into designing and building Vistoso Funeral Home in Oro Valley, fulfilling a need in many of the surrounding communities. Because of Bev and Ray’s commitments to volunteerism, they feel it is important for the staff of the funeral home to have the same philosophy of caring and giving which they hold dear.

Doug Harpold and his staff of Lori Campbell and Michele Luckett are all involved in many volunteer groups and activities. Some of these include membership in the Elks, Knights of Columbus, Rotary, Special Olympics and Tucson Health and Wellness. Vistoso Funeral Home offers many regional community services including Grief Counseling Groups with Casa de la Luz Hospice. Also offered are Pet Therapy visits with Bella, Lori’s marvelous Great Dane who helps console families and visits Sonora and Splendido twice a month, as well as spending at least two days per week at the funeral home. Vistoso Funeral Home in Oro Valley is also a collection point for Lions Club eye glasses and has provided a meeting point for scheduled Red Cross blood drives. The funeral home hosts meetings that help people deal with end-of-life issues. Doug and the compassionate staff are always available to answer questions and help with making an extremely difficult time as easy as possible.

I know Bev and Ray are thrilled to be living in SaddleBrooke, a community that understands the importance of volunteerism and the joy that comes from being able to help others in need.