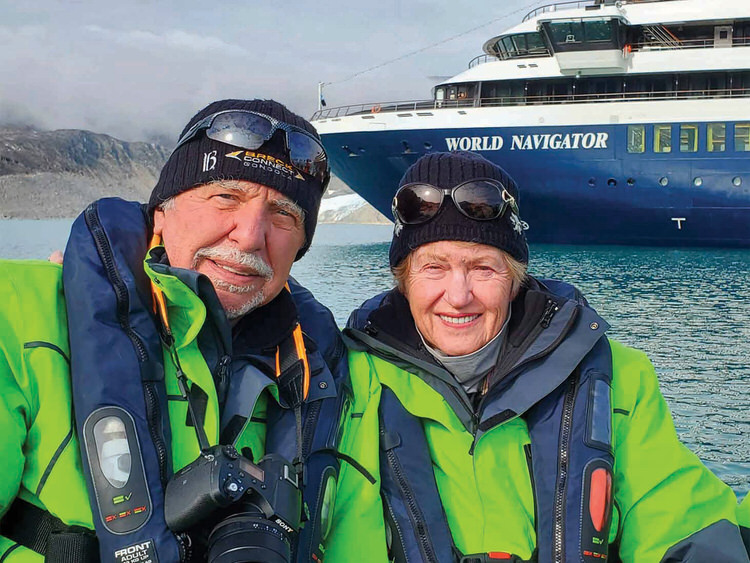 Bernie and Linda Nagy, SaddleBrooke residents, recently returned in early August from an Arctic expedition on the Atlas World Navigator. Previously, in March, they were on the same ship to the Antarctic. They were so impressed that they went on a second all-inclusive cruise to Svalbard, 80 degrees north, high above the Arctic Circle.

The trip began with a four-hour charter flight from Oslo, Norway, to Longyearbyen at Svalbard, the world’s northernmost town. It was established in the early 20th century with a coal mining industry that continues today. There was a short sightseeing bus tour of the small town dotted with triangular polar bear warning signs. The tour also pointed out a world Global Seed Vault. In the afternoon, the couple boarded the Navigator explorer vessel with 96 other Americans to begin their adventure to the most northern islands high above the Arctic Circle.

The small settlement of Ny-Aalesund was the first stop on Oscar Island. The houses there are strictly reserved for scientists from 11 countries. Ny-Aalesund has a small post office (close to the North Pole for those Santa letters) and the historic landing site for Roald Amundsen’s first zeppelin flight over the North Pole in 1926.

The next days of sailing and landing rewarded passengers with seal sightings, blue-tinged glaciers, reindeer, and countless birds such as arctic terns, guillemots, and barnacle geese.

Along the shores of Kapp Lee, one passed simple wooden shacks, remnants of the early 1900s when men worked in the “oil” industry. The tundra was strewn with weathered bones from mass killings of walruses and whales in the past century. The much-sought blubber was rendered into oil for lighting lanterns, paint, soap, and for other products in demand. Now, many of the simple, updated cabins at 80 degrees north are used as research stations where scientists help protect the wildlife and environment.

At Kapp Lee, the Navigator explorers were treated to close encounters with walruses, also called “Giants of the Sea.” Hundreds of the large beasts lounged close together at the shoreline, and more young ones frolicked in the water. Bernie and Linda were also surprised at the large number of tundra species of wildflowers here and at other stops. They were able to identify arctic poppies, sorrel, bistort, and several different saxifrages that are similar to wildflowers found at high altitudes in the Rocky Mountains.

On all the landing sites, guides with firearms went ahead and posted on high points to watch out for polar bears. One day, the Zodiacs couldn’t land, because several polar bears were spotted along the shoreline. From the ship, everyone rushed to the port side to view the bears and reindeer with long-lens cameras and binoculars. Although a mile away, one could still admire the polar bears’ loping strides, occasional sit-ups, and rollovers, along with reindeer grazing at a safe distance. Just viewing the animals from the ship was one of the highlights of the voyage.

There were daily lectures about the arctic ice, wildlife, and current environmental issues and climate. It is a fact that the Arctic is warming four times faster than the rest of the world, and for the first time this year, there was noticeable rain in the region instead of the usual snow.

After eight days roundtrip of Svalbard’s islands, the ship returned to Longyearbyen before the long flights home. The trip was booked through VIP-Alpine Tours in Sautee, Ga.