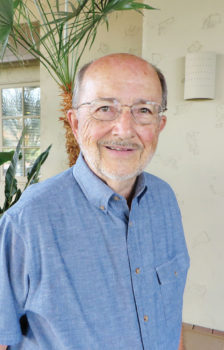 It’s year eleven for the Resurrection Church Men’s Breakfasts, and the first breakfast in a season that runs from October through May will be Saturday, October 6. The time is 7:30 a.m. and the location is the Outreach Center at the main campus in Oro Valley.

The breakfasts are held on the first Saturday of the month. There is always a short program and the program for October will feature Pastor Steve Wilson of the SaddleBrooke Community Church.

Before retiring to SaddleBrooke eight years ago, Steve spent 17 years as the Executive Pastor of the Spokane Valley Nazarene Church. In addition to his pastoral responsibilities, Steve spent 18 years and 15 years respectively officiating college and NFL football. He officiated with all the big-time coaches and at all the major stadiums and has been on the field with 23 Heisman Trophy winners. His much-anticipated talk for the breakfast is entitled “Scoring Touchdowns in Life.”

The Men’s Breakfasts are organized by a committee of five; and four of the committee members, Duane Hartzler, Ron McNutt, Al Toensing and Gary Zellinger are from SaddleBrooke. The fifth member, Ken Shephard, lives in Sun City.

Al Toensing has been involved from the beginning. He was one of the “instigators” behind the first breakfast in February 2008 and is one of the few who attended then that still attends today. At first Al and one or two others planned the breakfasts on a month to month basis. Later a committee was formed and Al has been a part of that body since its inception. Today he is the “Dean” of the group and facilitates its overall direction.

A chiropractor by profession, Al hails from Iowa, attended Concordia College in Minnesota and, as did his father before him, graduated from the Palmer School of Chiropractic in Davenport, Iowa. It was there he met another student, Patrice Askland, who had come to Palmer from Fargo, North Dakota. They married in 1957 on the NBC-TV’s Bride and Groom television program and after graduation practiced together for forty-six years, first in Morris, Minnesota and then for thirty years in Yuma. They retired and moved to SaddleBrooke in 2003.

Along the way they welcomed a son, Nathan, who today lives in Tucson with his wife, Korey, and two daughters, Faith and Hope, ages eleven and eight respectively. They moved to Tucson four years ago from Naperville, Illinois. Korey is also a Doctor of Chiropractic and she is one of the seven members of Al and Patrice’s families over three generations who either became or are chiropractic physicians. The others in addition to Al’s father, Al, Patrice, and Korey are Patrice’s two brothers and nephew. And all, interestingly enough, are Palmer graduates!