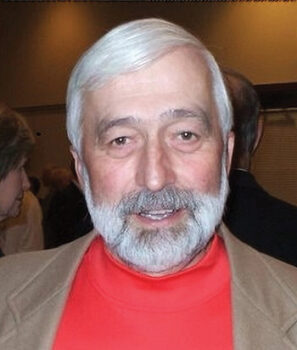 Local author EJ MacPhee to his readers and Ed McLaughlin to everyone else was born in Western New York State. He has a bachelor’s degree (Syracuse), a master’s degree (Oregon State University), and a doctorate (Stephen F. Austin State University), all in the wood engineering, science and forestry fields. He is married to his college sweetheart Kathy for more than 55 years, 23 of which have been in SaddleBrooke. They have four children and four grandchildren. They have a summer home in the Sangre de Cristo Mountains in Forbes Park, Colo.

Ed retired early after International Paper purchased Champion International. At 54, retiring didn’t seem right, so Ed was Mac the Handyman in SaddleBrooke in winter and a log home designer and builder in Colorado in the summer. A creative person from childhood, his dreams extended his imagination to real life. The result was an adventurous life for Kathy and Ed and their family. They have traveled to all 50 states, living in eight of them. With family in Italy, Ed and his four children and two of his grandchildren carry dual citizenship. Over the years, the family has been involved in scouting, backpacking, traveling the world, genealogy, competing in the highland games, and building log homes.

A lifelong reader and admirer of fantasy, magic, Santa Claus, and a love of writing, it seemed natural Ed would put his imagination and sense of adventure into the creation of imaginary worlds. For the last 15 years, he has written and self-published seven fantasy books and seven family history books, but only promotes his World of Armonia (harmony in Italian) series, with two novels (a duology) and two short stories.

In book one, Ponti, two groups of adventurers, unknown to each other, work to the same end. A group of four beautiful female warriors on a mission for the queen and a troika of misfits, a legendary dwarf, an old gnome wizard, and a young, human ne’er-do-well. Forces beyond them, including elves, trolls, orcs, dragons, slavers and strange creatures, change their fortunes. Their common adversary, a powerful wizard with experimental creatures and a mountainous ego.

In book two, Arthus, the finale, the world of Armonia is in trouble. The races: humans, elves, and dwarves are gathering, but their ability to work together against the Master is in question. The insignificant come to the fore.

Ed writes because he wants to share his imaginary worlds. “It’s not for income. It’s for fun. It’s not necessary to love fantasy to enjoy the adventure. My hope is that folks enjoy them.” He welcomes feedback. His email is [email protected]

The constant in all of Armonia is an old inn, with an ancient stairwell carved from a single tree by elves a millennium ago, in the village of Wellsville, run by Odie, the innkeeper, a pretty ordinary guy who embodies the vision of the ONE’s, originators of Armonia.

Ed’s books are available on Amazon under the author EJ MacPhee and recommended for all ages. They are also available at SaddleBrooke’s Artisan Gift Shop.