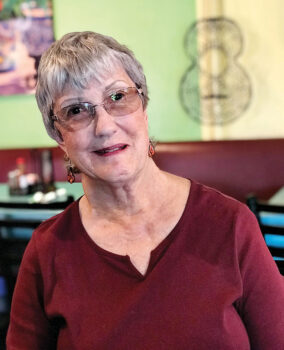 “Snippets. A piece of something: a fragment of information or news. All of life is made of snippets.”—from the back cover of Diana’s book.

Not long ago, while the pandemic restrictions still applied, and we were meeting with three other members of the SaddleBrooke Writers Group to keep our spirits going, Diana Sigler arrived early for our poetry discussion. “Oh, I have something,” she said, in her casual, self-dismissive way. That something was a beautiful book of her poems, sixty-nine of them, gathered under the title Snippets. We were surprised, even shocked and delighted, for we had urged Diana to make a book. “I’m thinking about it,” she had said. Now, making great use of her isolation time, and without talking about the project, she had done it.

Snippets is a wonderful collection. The subjects range widely, from family and friends to feelings about Memorial Day and war to the life in her garden here in SaddleBrooke. The poems also cover a wide range of emotions. There are poignant memories of her parents, anger about cruelty in its many forms, and laugh-out-loud humor, as when she discusses the spectrum of digestive ailments, personal problems, and side effects of prescription drugs presented in television ads as she tries to enjoy her dinner.

Some of the snippets come directly from Diana’s experience as participant or observer, while others are imagined. Distinguishing between fact and fiction in her work is difficult and ultimately not an important concern, for all the poems ring true, with just enough detail to bring people and feelings into three dimensions.

A recurring problem for any poet is the closing. When to finish? How much to say at the end? Reveal one’s feelings, or let the course of the poem make its statement without closing comment? Diana’s poems end in just the right ways, often giving an unexpected twist that illuminates the whole piece, as with the surprise finish to “Cheap Thrills” or the poignant conclusion of “Elegance.” There we see the elegant woman, “head high, back straight, skin pale as a ghost, or of a baby ninety years ago,” gliding through the dining room of her facility, “not aware of the white mashed potato flowering on the red fabric on her chest.”

The thread uniting this collection of poems is Diana’s clear-eyed observation, whether she is watching other people, noting historical moments, or witnessing the complexities of her own feelings. She is a brave poet, and the SaddleBrooke Writers Group is fortunate to have had her as a member for many years. Working with her as we gather again in group meetings will be one of the rewards of saying goodbye to the quarantine.

Snippets by Diana Sigler is published by Xlibris Press. It is available online from the press, at Barnes & Noble, and from Amazon, as hard copy or as an e-book.