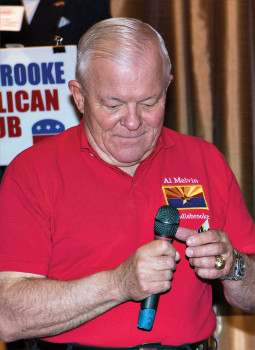 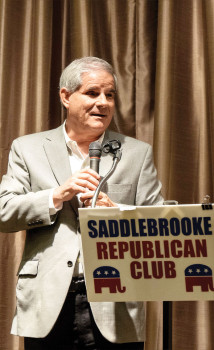 We had the company of more than 150 members this past February 10. President Neil Macdonald opened this second meeting of the year by introducing all four of our hard working women Board members. These Board members quite literally run most all of our operations. They are as follows: Linda Schuttler, our Director of Membership who has booked more than $2500 in returning and new members in just the month of January; then Jo Ann Livingston who is our Director of Special Events just locked in our year 2017 membership meeting dates for the second Wednesday of each month. Our Club Secretary Patricia Tarner keeps all of us in line and on the straight and narrow by faithfully and permanently putting all of our actions and Board decisions in writing each month. Our newest Board member is Carol Dart; as Director of Programs Carol is responsible for finding our speakers and also running member programs. Within this responsibility she has a huge coordination function and quite literally runs our speaker programs so that they smoothly give our audience a thoughtful presentation followed by a solid round of Q&A.

Steve Kendall has been our treasurer over the past three plus years. He also provides an imitable monthly newsletter which provides background of events far and wide to our membership. Through Steve’s tutelage our club’s financials have more than doubled over the past year. This will mean our club will be better able to support candidates after the primaries with more than twice that available in 2014. This is a superb effort! Thanks, Steve, for all you do for our club.

Our guest speaker Bruce Ash was welcomed to the podium and introduced to the SBRC membership by Carol Dart our Director of Programs. Mr. Ash spoke to the upcoming national elections and to the potential for a brokered convention in either party: he gave an assessment of the potential pitfalls for candidates and the potential of a split of the Republican or Democratic Parties. Bruce Ash has served on a local, national and international level in various health philanthropic and care organizations and brings his vast experience in business and fundraising efforts to Republican political activism in Arizona. Mr. Ash was selected as Arizona’s Republican Committeeman in 2007 and was re-elected to a four-year term in 2008 and 2012. Bruce Ash was selected to be a presidential elector in 2008. He was a member of the RNC Standing Committee on Resolutions (2009-2010) and serves on the Standing Committee on Rules (2009-Present). In 2010 Mr. Ash was elected Chairman of the Standing Committee on Rules (2010-2012) and he was re-elected to a four-year term in 2013. Mr. Ash served as special advisor to the 2012 RNC Convention Rules Committee and has served as a member of the RNC Executive Committee since 2010.