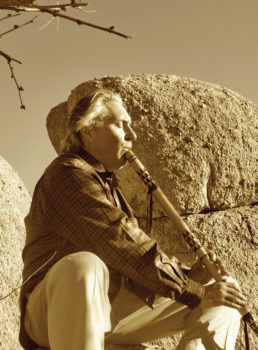 Gary Stroutsos, a master flute player, will be the featured musician at Ongtupqa, a special presentation about the Grand Canyon coming to SaddleBrooke in November.

Stroutsos will play a Hopi long flute that is a replica of some ancient flutes unearthed in 1931 from a cave in Arizona. The flutes have been curated by the Arizona State Museum in Tucson since 1957. The Hopi long flute is an end-blown rim flute that is very difficult to play and dates back more than 1,400 years.

For over 35 years and through 40 acclaimed recordings, Stroutsos has made it his mission to carry forward music from a variety of lands and cultures to future generations. Originally trained as a jazz flutist, he now focuses on wind instruments featuring American Indian, Chinese, Cuban and American jazz music. Some SaddleBrooke residents may have heard him on the soundtrack of Ken Burns’ PBS documentary Lewis and Clark – The Journey of the Corps of Discovery.

The word Ongtupqa translates from the Hopi language as “salt canyon.” It’s the tribe’s word for the Grand Canyon, which they consider their spiritual homeland. The November 7 presentation in SaddleBrooke will include narration, music and visual art to explore the Hopi connection to the canyon.

Accompanying Stroutsos on the flute will be Matthew Nelson, an ethnomusicologist who drums on clay pots and who also is executive director of the Arizona Trail Association. Nelson introduced Stroutsos to Clark Tenakhongva, a Hopi elder and vocalist. The trio has just released Ongtupqa DVD and CD recordings done inside the Grand Canyon’s Desert View Watchtower. Portions of the DVD, featuring breathtaking panoramas of the canyon and video clips of Tenakhongva, will be part of the SaddleBrooke event.

Tenakhongva said it’s his hope that the Ongtupqa recordings not only will be educational and entertaining for a wide audience but also will inspire young Hopis to continue their ancient traditions through music, stories and dances. A portion of DVD, CD and ticket sales will directly support cultural programs for youth on the Hopi mesas in Arizona.

Ongtupqa will be presented at 6:30 p.m. Wednesday, November 7 in the MountainView Ballroom. Tickets are on sale at the MountainView Administrative Office from 8:00 a.m. to 4:00 p.m. Monday through Friday and online at https://tickets.saddlebrooketwo.com. Ticket price is $12 per person before September 30 and $15 afterward. A special themed dinner to complement the program will be offered in the Bistro before the show for $13.99.

You may learn more about Ongtupqa and hear sample songs from the Ongtupqa CD at www.ongtupqa.com.