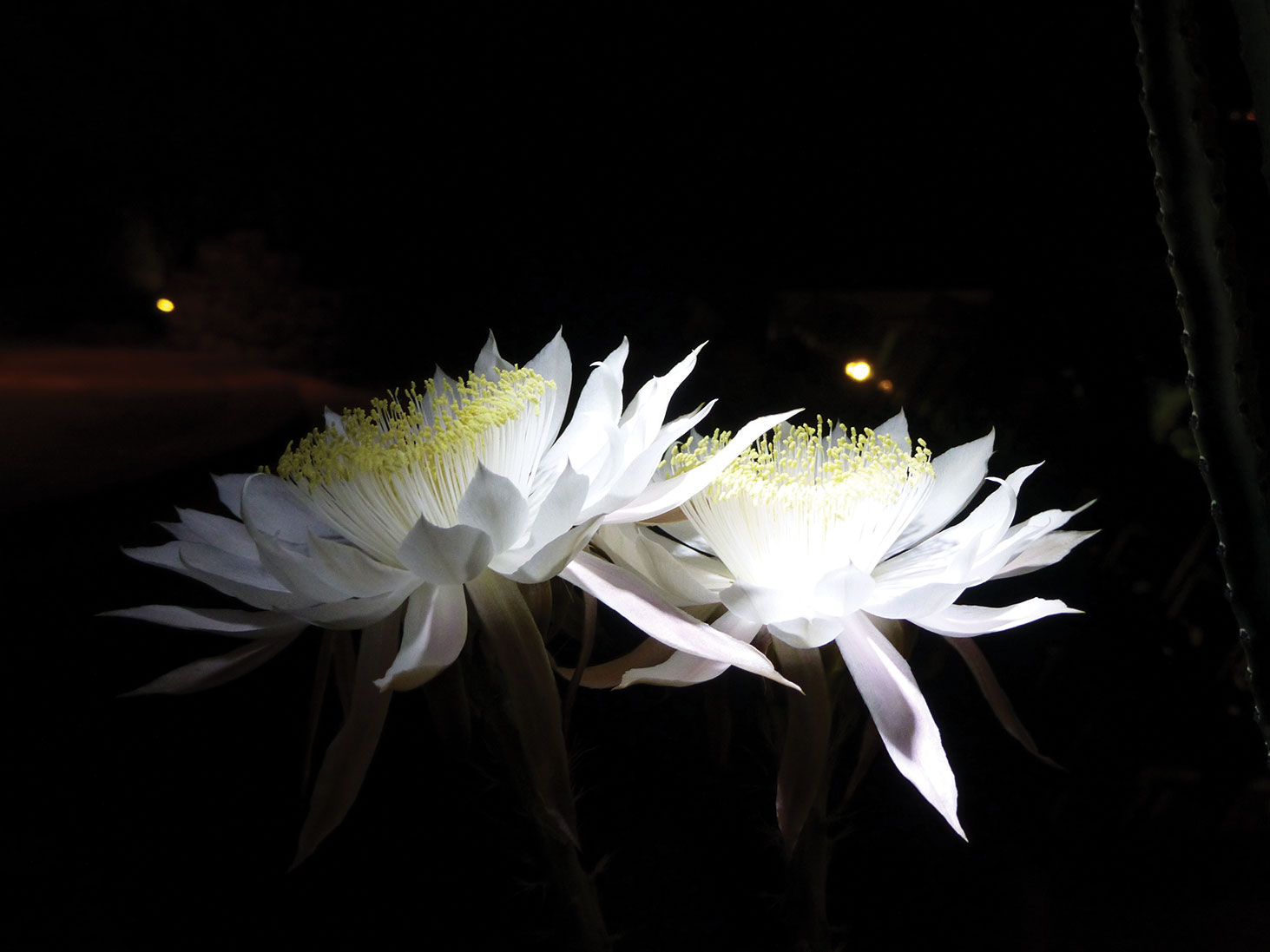 SaddleBrooke Nature Club adopted the Peniocereus greggi (desert night-blooming cereus) as its logo. It is one of the Sonoran Desert’s most famous yet least encountered plants. Most of the year it is a floppy, nondescript cactus. But on just a few nights it becomes the star of desert plants with its elegant white bloom the size of a dinner plate and a fragrance that is intoxicating.

Plants in each population bloom in synchrony; large ones can produce as many as 20 flowers at once. The legend is that they all bloom on a single night each year. In fact, each plant produces three to five flushes of flowers between late May and early July. During each flush most of the flowers open on one night with a few stragglers the night before or after.

The desert night-blooming cereus usually grows as individual plants, not in a group. The flowers do not self-fertilize. Flowers are cross-pollinated by hawk moths. Birds are also attracted when the fruit turns red.

When these plants are located in ideal conditions they can grow one hundred times larger than they do in nature. Archaeologist Julian Hayden had a plant in his Tucson yard that was over eight feet tall and perhaps twice as wide! It produced two hundred flowers one night then another one hundred flowers the next night!

Tohono Chul Park’s Bloom Night is a much anticipated evening in Tucson. The community is kept informed via email as to when the night of the Desert Queen bloom is likely to occur; then the morning of the event local media and social media spread the word. Hundreds of people scout the paths for the many night-blooming cereus plants scattered throughout the park.

There at Tohono Chul Bloom Night the Navajo legend of the night-blooming cereus is told. In the dark, in the park filled with the fragrance of The Queen, it is an experience not to be forgotten.

SaddleBrooke Nature Club meets at 4:00 p.m. the second Monday of the month in the Coyote Room downstairs at the HOA 1 Clubhouse. June will be the last meeting before summer hiatus. The speaker, Kelly McGalliard, will be telling about the history of Macaws in the Southwest and how they have been used by native cultures. She plans to bring some Macaw friends with her!

The first fall meeting will be October 12. The topic is Ethnobotany.

A field trip to Tohono Chul to study this topic further is being planned.

December 14, Julie Strom will be speaking to us about Living with Urban Wildlife emphasizing the Javelina.

For further information about SaddleBrooke Nature Club check out our website at www.SaddleBrookeNatureClub.com.