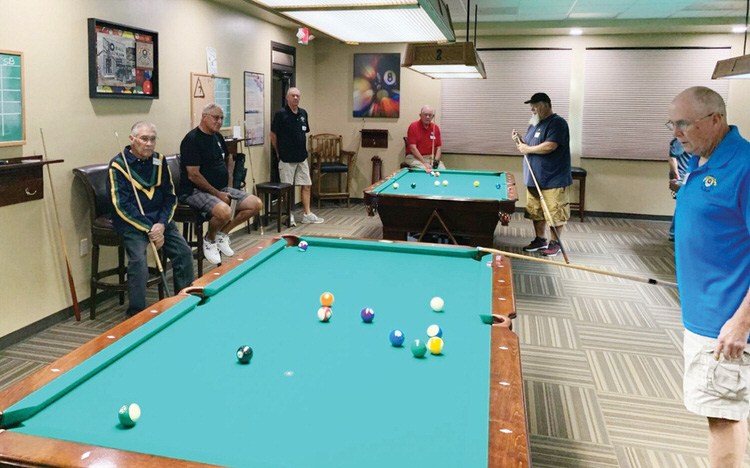 Pictured are Jack “Crash” Hoverter (at the table), Tony “The Snake” Cardillo (second from the left, sitting and watching the action), and Gary “One Rail” Barlow (third from left, standing near Tony).

The Pool Players of The Brooke (PPB) would like to thank our sponsor for this event, Kim Karmenzind of KJK Insurance Advocates ([email protected], 520-251-4491), the Quail Creek (QC) Billiards Club, and Travel Team Director Dennis Desmond and their members for the friendly competition and camaraderie. We would also like to thank Dominic Borland, captain of the PPB Travel Team, and the help of Ron Ridge.

The format was simple and interesting. Each of our teams would play each of their teams for three games of eight-ball, with each game won being one point for the winning team. There were a total of 48 points in the match. This match was not for the bronze plaque but to help out Quail Creek, as their facility is being expanded and will have four nine-foot Diamond tables. We also had 10 players for PPB so that it would give more members some experience in playing in a format like this. The last group of four played two matches each, instead of four.

After the first round, it was tied 6-6, but from there, we fell off the cliff. The second and third rounds were the same at 8 for QC, 4 for the good guys. The final round was an embarrassing score, with QC at 9 and PPB 3, making the final score QC 31, PPB 17—Ouch! The good news is that we helped out a community that has no place to play, and it was not for the bronze plaque, which we still have, at least for now. We enjoyed our luncheon afterwards at the RoadRunner Grill and talked about playing pool on QC’s nine-foot tables when their room is completed. Rack’em up!