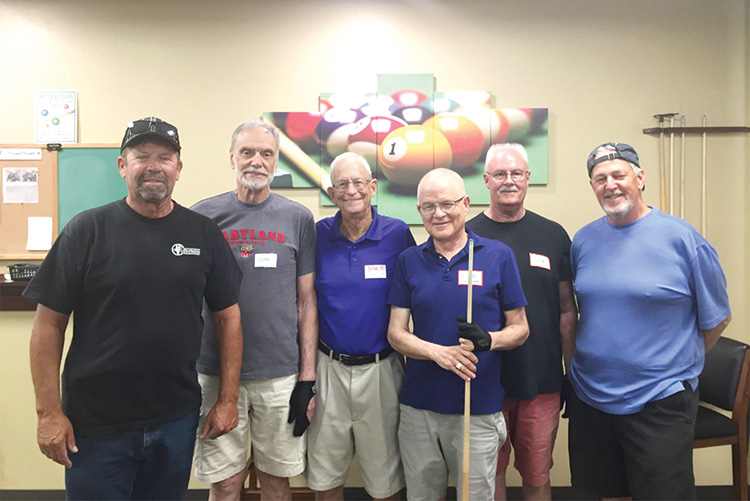 Pool Players of The Brooke (PPB) want to thank our generous sponsor, SmashBurger. On June 15, 2019, the PPB hosted an Under 25 Partners 8-Ball Tournament. The PPB decided to eliminate their highly skilled players from this tournament and let other club members compete for the Under 25 Championship. Eligible participants must have a skill rating of 25 or less (40 is a perfect skill rating). We also decided to have a referee on each of the three tables to help some of our club’s newer members get more familiar with the Billiard Congress of America’s 8-Ball Rules. Tournament directors were Dominic Borland and Ron Ridge. Tournament referees were Dominic “The Doctor” Borland on Table 1, Phelps “Frenchfry” L’Hommediue on Table 2 and Gary “One Rail” Barlow on Table 3. The top nine Skill Rated players from the eligible Under 25 players drew a partner from the balance of the field. After the draw, the nine partners were Jay “The Shamrock Shooter” Clary and Dale Trudo, Jack Hepner and Julie “Cutter” Ferguson, Jerry Cogswell and Darlene “Breaker Breaker” Morris, Nancy Barrett and Frank Strubel, Gary Stewart and Romayne Trudo, Jim “Aviator” Wydick and Bob Fagotti, Jim “The Artist” Morris and Warren Henderson, Bob “O” Ogle and Dick “The Stick” Schroeder and Michael Ferguson and Dick Titus.

Jim Wydick/Bob Fagotti’s road to victory started with a bye in round 1. Then, in succession, they defeated Michael Ferguson/Dick Titus, Jim Morris/Warren Henderson, Jay Clary/Dale Trudo and Jay Clary/Dale Trudo again for the title of Under 25 champions! Jim and Bob went through the whole tournament without losing a match. Great job Jim “Aviator” Wydick and Bob Fagotti!

The 8-Ball Partners tournament started at 1:00 p.m., and after 26 games and three hours of 8-Ball, the tournament was over. We competed and met some new friends that share our passion; that is a good day! Rack ’em up!

The Pool Players of the Brooke extend a big thank you to all our participants and sponsor. You can follow the PPB at https://poolplayersofthebrooke.blogspot.com/.