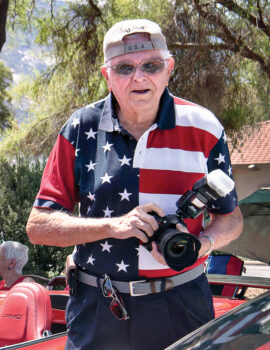 Bob Koblewski was known as “The SaddleBrooke Photographer.” He leaves behind a legacy of talent, energy, generosity, and kindness. In 2018, Bob was our club’s first Photographer of the Month. Fondly known to us as Bob K., he knew how to capture the essence of our community, the spirit of Tucson, and the unique majesty of Arizona’s wildlife. He passed away on June 17, 2021.

An expert photographer with a passionately keen eye, he enjoyed taking photos of nature, wildlife, special events, arts, and people. His energy seemed boundless, frequently taking and sharing photos that he shot locally from his golf cart and also around the region via car. We enjoyed seeing the animals, including deer, javelinas, coyotes, bobcats, rabbits, and wild horses. We adored his pictures of the nesting owls with chicks that he discovered at several sites in SaddleBrooke.

Occasionally, SaddleBrooke residents had called the club seeking a professional photographer to document a family celebration. It was to Bob that we referred those requests, knowing he would graciously accept and find time to help others preserve special memories. A few weeks ago, we finally gathered as a group after over a year’s delay because of COVID-19 restrictions. It was a joy to see Bob and his wife, JoAnn, alongside us in the Agate Room on that day. He was smiling with warmth and an eagerness to pursue photography.

It is with thankfulness that we knew him and sadness that we bid him farewell. Bernie Nagy said that he will always remember the Salt River field trip that Bob led so that we could photograph the wild horses he loved. Bernie admired Bob’s diligence about photographing Tucson’s 275 wall murals, as well as his creating and publishing a book of murals. That book was one of at least ten that he published.

In 2015, Tom Costner met Bob at the SaddleBrooke Gift Shop when they were both seeking a place to show and sell photographs. Tom reflected that Bob was a consummate photographer and a gentleman. “Bob was a friend and mentor,” commented Elizabeth Henley. Bill Brennan said that Bob was an excellent photographer and a wonderful gentleman, while Sue Chickman said that he was a special person and a favorite photographer. Another friend, Ken Henry, was away traveling and felt saddened about missing the opportunity to share adventures with Bob when he would return.

Mark Guinn, SaddleBrooke Photography Club president, summed up our sentiments by saying, “He will be missed for sure.”