The SaddleBrooke Hiking Club welcomes Dr. James (Jim) Smith, a nine-year club member, as the featured speaker at its monthly meeting and program on March 16. Dr. Smith’s presentation is titled “A Hiker’s Guide to Birding: SaddleBrooke, SE Arizona, and Beyond.”

Alongside wildflower viewing, birding is an easy way for hikers to immerse themselves in nature while on the trail. No one knows this better than Jim, a birder for more than 20 years and a lifelong outdoor enthusiast.

Jim started birding in Oklahoma and Texas, where he was born, but has been known to use binoculars frequently on Washington’s Lopez Island, his summertime home, and in Arizona. He has guided birding trips in Southern Arizona and Texas. He knows his birds and knows how to have fun watching them. As a keen photographer enjoying sports and nature imaging, he will treat attendees to some nice bird images in his presentation.

Hiking Club presentations are held six months of the year, on the third Wednesday of the month in the SaddleBrooke One Activity Center at 4 p.m. Club members and other SaddleBrooke residents are welcome to attend. 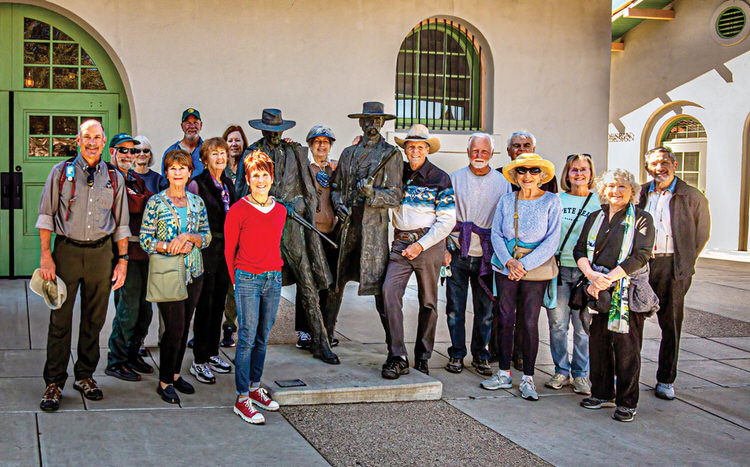 Cowboy Walt and his colorful band of Gringos join Wyatt and Doc. Photo by Bob Shea.

Most SaddleBrooke residents spend little time in downtown Tucson. Yet, our city has a rich and colorful history. Many find it of interest to know that Tucson has existed under four flags: Spanish, Mexican, Confederate, and United States. Each of those influences left cultural and historic landmarks.

The SaddleBrooke Hiking Club, led by guides Walt Shields and Tom Stafford, has been conducting a series of downtown walking tours. The tour begins at the Mercado, where participants take the streetcar into the downtown area. They walk to the newly renovated Southern Arizona Heritage and Visitors Center, which has a number of displays depicting the history, culture, and current attractions of the region. From there, the route proceeds to the old courthouse to view the courtroom where John Dillinger was arraigned in 1934.

The walking portion of the Turquoise Trail tour is about 2.8 miles and passes buildings and monuments that signify important events in Tucson’s history. Of particular interest is the Barrio District with its colorful Sonoran row houses. Many of these structures are undergoing renovation with vibrant, newly painted colors. Further on, the iconic Hotel Congress looks much the same as it did when the Dillinger gang was arrested there following a fire.

The tour concludes at the restored train depot, where there are life-sized statues of Wyatt Earp and Doc Holliday. Here, these iconic characters were involved in a shootout in which John Stillwell was killed and left on the railroad tracks.

After a short walk back to the streetcar, groups return to the Mercado for the best street tacos north of the border.