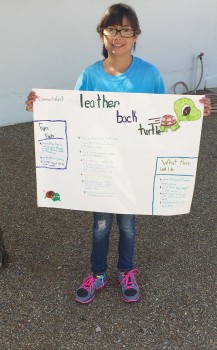 Alan Levenson began his association with the Oracle School District seven years ago tutoring Mountain Vista School students in reading. Recognizing the unique challenges students from small rural schools face, Alan and his wife Betsy decided they wanted to do more to give students that extra push that helps them expand their expectations and accomplish things they never dreamt of. Alan and Betsy first took action by helping form the new Oracle Schools Foundation for which Alan is one of the founding Board members. Alan and Betsy helped kick off the Foundation’s inaugural year by creating an opportunity for an Oracle School District student that would serve as a launching pad for future success that is boundless and filled with possibility.

The Levensons teamed up with Superintendent Dennis Blauser and Principal Nannette Soule to identify a first ever recipient of the Levenson Family REACH Award. The REACH scholarship is a $1500 award to be used by the recipient for an academically intense educational summer camp. After much input from teachers, sixth grade honor student Natalye Pinedo was chosen to spend one week at the Sally Ride Science Camp at University of California San Diego this summer. Natalye was very nervous to begin her adventure but quickly settled in after the first full day. Natalye lived on campus during the camp and had two roommates, both from California. Natalye said that every day was filled with excitement, experiments and tons of research. Natalye’s favorite parts of the experience were the excellent food and a field trip to the Birch Aquarium.

It is the Oracle Schools Foundation and the Levenson family’s desire that this award continue on indefinitely and that other people support the foundation to create even more opportunities for children in the Oracle School District.