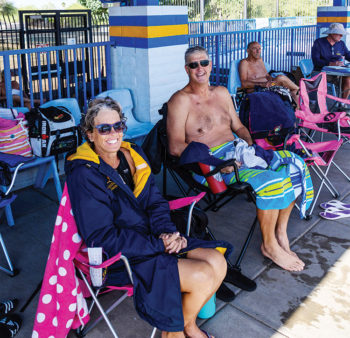 Since moving to SaddleBrooke in December of 2018, Mike and Jeanie Polak have become an integral part of the SaddleBrooke Swim Team. I asked them about their swimming background. Mike was born and raised in Pittsburgh, PA and started swimming as a freshman in high school. He received a full-ride scholarship to the University of Pittsburgh where he swam for two years. Mike coached swimming for 16 years getting kids to Sectionals, Nationals and Olympic Trials as well as instilling a lifelong love of the sport. Mike started swimming Masters in 2008 at his wife’s persistence. Jeanie was born in NJ and lived in RI and PA as a kid. She began swimming competitively as a ten-year-old and was a walk-on to the University of Pittsburgh Swim Team and swam a year. Jeanie has coached and taught swimming. She, too, began swimming Masters in 2008. They met in the freshman dorm elevator where Mike noted her tan and California surf shirt and asked her whether she was from California. She glared at him and said, “No!” So, it wasn’t love at first sight! They shared many classes and quickly became friends, sweethearts and married after college in September 1983. They raised two children who were also competitive swimmers and swam in college. Prior to moving to SaddleBrooke, they lived in the Bear Canyon area of Tucson and swam for Ford Aquatics. They had noticed the presence of the SaddleBrooke Swim Team at various meets and thought the team looked like fun! Then Mike faced an even bigger challenge than swim competitions as he was diagnosed with B-Cell Lymphoma and underwent extensive chemotherapy which killed the cancer but also deteriorated his body and generated what doctors refer to as “collateral damage.” Mike swam the entire time he was going through chemo and says that swimming kept him alive! A song by Jack Mannequin called Swim became his fight song. Jeanie had been trying to convince Mike that they should move to SaddleBrooke and after winning his battle with cancer, he agreed. Mike still has to be monitored every three months for recurrence and says, “The fear of the unknown is scary.” If you want to find Mike, check the pool. He’ll be swimming for his life, and his wife Jeanie will be there making sure he does!