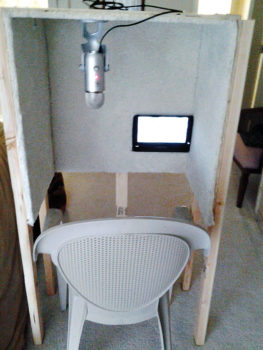 The Making of an Audio Book

The audio book Mustang Ace was finished in February 2018, and is available on Amazon and on Audible.com. My brother Mark and I decided to create the audio book to make Mustang Ace available to a wider audience; I did the reading and Mark did the editing. It turned out to be a much larger task than either of us imagined; the time involved was almost two years with a major false start. I am including this description of the process both for general entertainment and information and as a preliminary guide for anyone who would like to make a similar effort. The Audible website does have professional readers available for creation of audio books and you can also sign up to be a reader.

For my first attempt I downloaded the free software Audacity. Most of the editing functions of this software are self-explanatory and there are a great number of help files available. I also purchased a good quality microphone with a USB connection. There are a variety of these microphones for direct connection to your computer for about $150. I attempted for several months to create audio files by reading the chapters from the book with the microphone on my desk next to the computer. My brother made a valiant attempt to edit out the extraneous noise from the chapters I sent him, but he finally said “hey, this is junk and it isn’t working.” Microphones are extremely sensitive and the sound was different when it was positioned even in a slightly different place: the noise from stomach growling, trucks and gardening blowers and even changing the pages of the book were overwhelming. In addition, the noise from the computer fan contributed to the general mayhem.

So, I downloaded a short ebook, How to Create an Audio Book for Audible by Rob Archangel and Buck Flogging from audible.com. I concluded that I needed a sound booth but that I could do it quite inexpensively. I measured the doorway and dimensions of our walk in closet, then obtained a sheet of plywood and cut out the sides and top of an open faced box, mounted it on 2x4s and then lined it with leftover carpet from the house. The structure would just go through the door and fit in the closet. The microphone was mounted upside down on the inside of the top, and a slot was cut so that the screen of the computer was inside the box, but the rest of it was mounted outside of the box to attenuate the fan noise. I then got a Kindle reader and bought the Mustang Ace ebook, no more page turning noise! When I wanted to record I would carry it into the closet and sit with the door closed and my back to all the clothing racks. Of course, my wife would declare to all her friends that “I was back in the closet!” From the outside the recording structure looked a lot like a well-known children’s cartoon character so I dubbed it “SpongeBob Square Box.”

Brother Mark was now happy and satisfied with the quality. He is an amateur musician and has a studio set up in his house. I would record each chapter and send it to him. He would then send back the corrections he felt that were needed and I would make them and upload the final version of the chapter to Audible.com. When we finally finished with production early in 2018, the folks at Audible reviewed it, declared it of good quality and loaded it on the websites for distribution.

The following are a representative pair of comments from the 50+ available on Amazon, and describe the impact of the book better than I can:

A Cut Above and Five stars:

With respect to Robert Goebel, before considering the exciting story he recounts, let’s begin with a statement that is rarely applicable to WWII recollections: Robert Goebel is a WRITER. His prose is smooth and engaging. And note: This is not an “as-told-to memoir.” Goebel is unusually literate and a pleasure to read.

The substance of his tale is of historical significance: The first-hand experiences of a newly-minted P-51 pilot who learns the hard way to become a fighter ace and combat commander.

The Italian theater of WWII was eclipsed by its (Northern) European counterpart. Yet the fighting there was tough, without quarter, and chillingly bloody. Goebel lost many comrades in ways he recounts with refreshing, yet not maudlin, emotion. He fought. He felt. He cared.

Goebel’s memoir is one of the dozens of WWII accounts I recommend unreservedly, both for its accuracy, and its emotion and literary impact.

Holds your attention from cover to cover:

I’ve read over a dozen personal accounts of fighter pilot’s experiences from WWII. This one takes second seat to none. Goebel did a tremendous job of putting you there. From a young boy right out of high school, hopping freight trains and hitch hiking across the country, to a seasoned 21 year old double ace returning home and wondering how he will fit back into a world outside the air warrior fraternity, you are given the opportunity to live those few years where young men came to define the words, Fighter Pilot Ace.