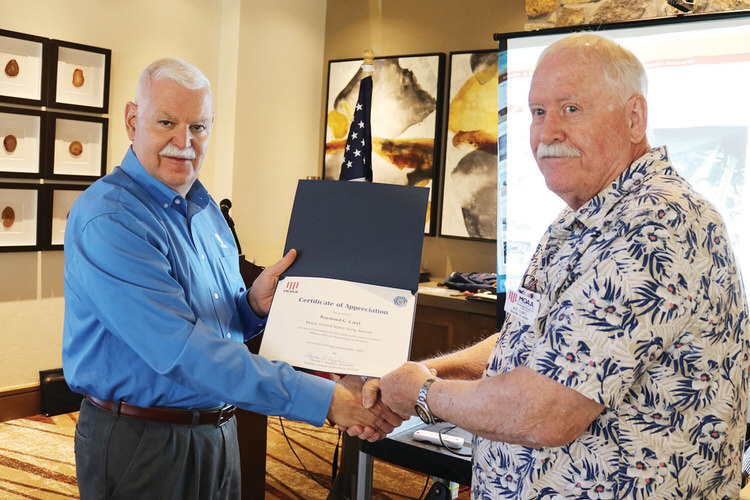 The Catalina Mountain Chapter (CMC) of the Military Officers Association of America (MOAA) held its most recent meeting on Dec. 18 at SaddleBrooke Ranch. The meeting began with a business session presided over by retired Capt. Chuck Vaughan, U.S. Navy, President, during which members were updated on the chapter’s current and upcoming activities.

The day’s speaker was CMC member, retired Maj. Raymond Caryl, U.S. Army. He talked about his experience flying with the Army’s 220th Reconnaissance Airplane Company (RAC), with the callsign the “Catkillers,” in support of U.S. Marine Corps operations in the Republic of Vietnam (RVN).

Maj. Caryl explained that as the Vietnam War strategy changed, the Marine Corps needed forward air control and targeting for their A-4 Skyhawk Jets. The Marines, however, did not have enough aircraft and flight crews available. The Army’s 220th RAC was then assigned this interservice mission.

Much of Maj. Caryl’s time was spent assigned to the Marine I Corps providing close air support for the 1st and 3rd Marine Divisions in northern RVN near the Demilitarized Zone (DMZ) with North Vietnam. The Catkillers also provided targeting coordinates to the battleship USS New Jersey (BB-62) for its 16-inch and 5-inch guns while it was sitting off the coast of RVN near the DMZ.

Maj. Caryl’s presentation included many photographs of the action below taken from his Cessna O-1 Birddog. The Birddog aircraft was based on the civilian Cessna 170 with the major differences being there were only two seats, and these were placed one behind the other, as well as angled side windows were installed for better ground observation. In the case of the Catkillers, the Army pilot was in front and the Marine Corps air observer was behind.

Targeting was done by visual observation, and the devices used to aid the attacking aircraft were smoke grenades and white prosperous (Willie Pete) rockets launched from rocket tubes under the aircraft’s high wings. The 0-1 Birddog aircraft had no armor, and its primary defense was flying above the treetops. Maj. Caryl’s personal weapons were the Colt Automatic Assault Carbine (CAR-15) and a sidearm pistol.

Maj. Caryl is also the author of the book CATKILLER 3-2: An Army Pilot Flying for the Marines in the Vietnam War, published by the Naval Institute Press in 2019. Signed copies of his book were available to those members who wanted a copy.

The January luncheon meeting of the CMC will be held at SaddleBrooke Ranch Grill on Saturday, Jan. 21 at 11:30 a.m. The speaker will be Lenwood Hampton, a member of the National Council of Administration of the Veterans of Foreign War (VFW), representing the Department of New Mexico.

Mr. Lenwood is a Vietnam War veteran, having served with the U.S. Navy from 1965 to 1975. His decorations include the Navy Unit Commendation, Meritorious Unit Commendation, National Defense Service Medal, Vietnam Service Medal with device, and the Vietnam Campaign Medal. Mr. Lenwood will discuss the current status of the VFW, as well as its past, present, and future endeavors and initiatives.

If you are a former or present officer of the uniformed services interested in joining our organization, please contact Membership Chair former Lt. j.g. David Bull, U.S. Navy, by email at [email protected] or by telephone at 520-825-0604.

The membership of CMC encompasses the areas of Catalina, Oracle, parts of Oro Valley and Marana, SaddleBrooke, SaddleBrooke Ranch, and Sun City. For additional information, please visit our website catalinamountainsmoaa.org.

The CMC and MOAA are nonprofit veterans’ organizations dedicated to maintaining a strong national defense and preserving the earned entitlements of members of the uniformed services and their families.