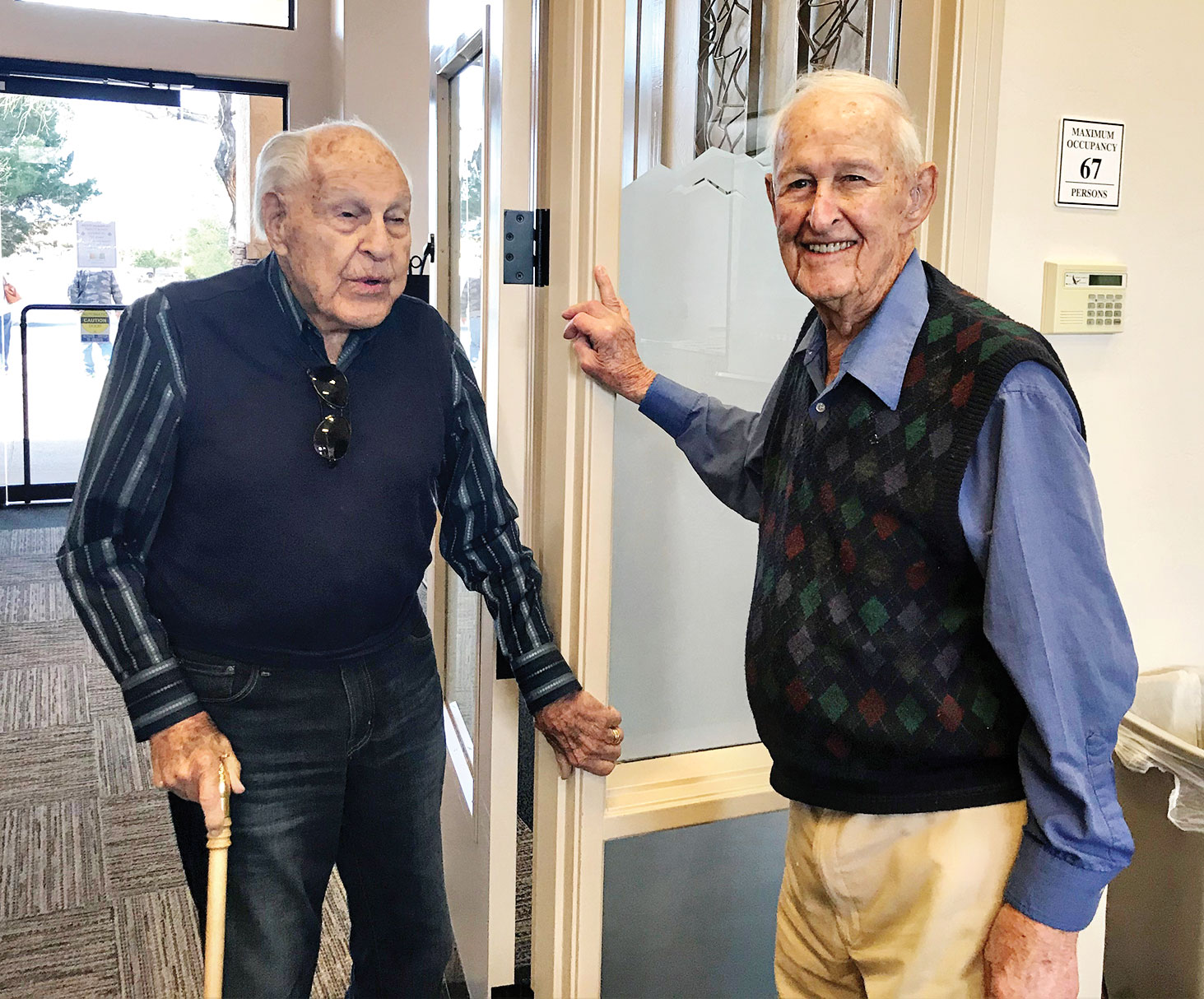 The Catalina Mountains Satellite Chapter met March 16, 2019, at MountainView Mesquite Grill in SaddleBrooke.
Our March guest speaker was Petty Officer (PO) 1 (E-6) Harry Lerner, U.S. Coast Guard, who talked about his years being in the United States Coast Guard. Both his parents were swimmers so he grew up swimming, as well. At 16 he left home to join the Navy but he wasn’t accepted. Disappointed, he called his mother, who suggested he join the Coast Guard. He hadn’t heard of the Coast Guard, but listened to her and went to the Coast Guard Recruiting Office. The line wrapped around the block. Those coming out told those waiting they were being extremely picky. He stuck it out, passed the entrance exams and joined the Coast Guard. He attended Coast Guard Boot Camp in New Jersey in 1952. His most memorable event of his boot camp was getting to march in Dwight Eisenhower’s second inaugural parade. He also spoke of seeing Mamie Eisenhower christening the first nuclear submarine, Nautilus, in Groton, CT when he was sent there to attend Coast Guard rigging school.
PO1 Lerner talked about his assignment to Annette Island, Alaska. When he arrived, he went from his quarters to the hanger, just as an aircraft departed on a mission. He said that if he arrived any earlier, he would have been on that aircraft. As it turned out, the aircraft crashed and all on board were lost. He shared about a memorable experience in Alaska on board Coast Guard flights, with four men in plain clothes on specific routes. The crew had no idea who they were or why they were flying them around. A few months later, PO1 Lerner was called in front of the formation, where he was awarded the Meritorious Service Medal for his part in the mission flying these four men. They turned out to be Navy Intelligence agents mapping routes the Nautilus would take in the Alaskan waters.
Colonel (Retired) Bill Nagy, President of Catalina Mountains Satellite (Tucson) Chapter of MOAA presented a Certificate of Appreciation to Petty Officer 1 Harry Lerner for his presentation. Additionally, COL Nagy presented a Certificate of Appreciation to U.S. Marine Corps (Retired) Colonel Martin “Marty” Lenzini in recognition of his tireless recruiting efforts and support during recent SaddleBrooke Ranch Expo 93.
A surprise encounter occurred for us. 102-year-old Captain Fred Klein, a former WWII U.S. Marine Corps B-25 pilot greeted 100-year-old Colonel Chuck GuteKunst, a former WWII Air Force B-17 pilot at the Catalina Mountains Satellite (Tucson) Chapter of Military Officers Association of America (MOAA) at their March 16 meeting.
Our last meeting before summer break is Saturday, April 20 at 11:30 a.m., Catalina Room of the Mesquite Grill in the MountainView Country Club complex. Please contact LTC (Retired) Andrew “Drew” Fairchild, Catalina Mountains Satellite Membership Chairman, [email protected] or Col (Retired) Kurt McMillen, Catalina Mountains Satellite Treasurer, [email protected] for reservations and specific information on attendance, location and parking.
Subsequent meetings will be held the third Saturday of each month, October through April at Catalina Room of the Mesquite Grill in the MountainView Country Club complex starting at 11:30 a.m. with lunch followed by a short business meeting and a speaker. Spouses are welcome and invited.
For additional MOAA information, contact Col Bill Nagy, Catalina Mountain Satellite President, at [email protected] or Col Tom Owens, MOAA Tucson President, at [email protected]m. Check our website www.tucsonmoaa.com for information.
The Catalina Mountains’ Satellite is part of the Tucson Chapter and encompasses northwest Tucson to include Catalina, Oracle, parts of Oro Valley and Marana, SaddleBrooke and Sun City.
The Military Officers Association of America (MOAA) is a nonprofit veterans’ service association dedicated to maintaining a strong national defense and to preserve the earned entitlements of members of the uniformed services and their families and survivors.