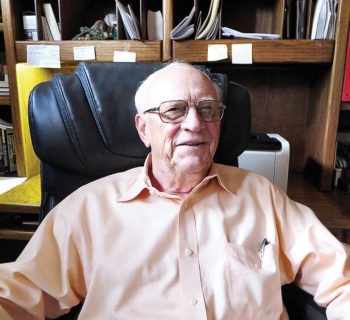 David Stanard
The Resurrection Church Men’s Breakfast season is drawing to a close. After its meeting in May, the group will break for the summer and reconvene in October. By every metric these past few months have been positive. There has been good food, record attendance and a number of interesting and memorable programs. It is anticipated that the May 4 program will also be a good draw as it features Elisabeth Wheeler, a member of Resurrection Church, who has hiked many times in the Grand Canyon and has formed and leads a Church Life Group centered on hiking.
Featured at the March 2 breakfast in his sixth appearance before the group was SaddleBrooke resident and animal health visionary Herman Haenert. Born in what later became East Germany, Herman, his parents and brother escaped to the West in 1953. The family eventually settled in Scales Mound, Illinois where Herman graduated from high school in 1957. Then, in 1960, he graduated with an accounting degree from the Rockford Business College in Rockford, Illinois.
It took Herman a while to find his niche, but that happened in 1971 when he started his first business, Wholesale Veterinary Supply, in Rockford. Over the next twelve years he started a number of associated companies and they were sold as a package to ConAgra in 1984. In 1992 Herman and his wife, Judy, moved to SaddleBrooke and since then he has primarily been involved in translating his own creative ideas into practical animal health applications. At a time when most people would be comfortably retired, Herman’s mind runs nonstop and he is a much sought after national and international figure in animal health and nutrition.
His Men’s Breakfast talk, “Revealing the Secrets of Cranberries” addressed Herman’s interest in improving the health of both humans and animals through cranberry products and supplements. Herman calls cranberries “the super fruit” and he explained to the group the potential benefits of scientifically researched results of cranberries to cardiovascular health, decreasing inflammation, glucose metabolism, gastro-intestinal health, dental health and as an antioxidant.
To capitalize upon the opportunity presented by cranberries, Herman formed a separate company, Western Nutritional Laboratories, and this company has two exciting products. The first is a proprietary quick dissolving tablet, already on the market, that will greatly affect the dental as well as the overall health of cats and dogs by removing and preventing mouth plaque and tartar and improving bad breath. The second is a cranberry supplement for humans which should be available soon.
The Resurrection Church Men’s Breakfasts take place the first Saturday of the month for the months of October through May at the Outreach Center at the main campus in Oro Valley. Time is 7:30 a.m.
Resurrection Church at SaddleBrooke holds its all-denominational Sunday worship services at 9:00 a.m. and 10:30 a.m. in the Vermilion Room of the SaddleBrooke One Clubhouse. Starting Sunday, May 5, the Church will go to its summer schedule of one service at 10:00 a.m.