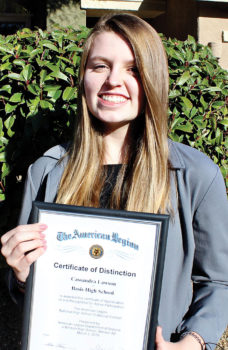 Oro Valley Post 132 sponsored contestant Cassandra Lawson, a sophomore at BASIS of Oro Valley, placed first at the American Legion Dept. of Arizona state competition. Cassandra now advances as the state’s delegate to the American Legion national finals competition in Indianapolis, IN, to be held in April. The Oro Valley Post 132 program of the 82nd annual American Legion High School U.S. Constitution Oratorical Scholarship Contest began in February with six contestants, all from BASIS of Oro Valley High School. There are five levels of competition beginning at the local Legion Post level and ending with the national finals competition with monetary awards at each level. The program is designed to instill a greater knowledge and appreciation of the U.S. Constitution among high school students. The contestants deliver a memorized oration of eight to ten minutes on any chosen aspect of the Constitution and must give emphasis to the attendant duties and obligations of a citizen. They are required also to deliver a three- to five-minute speech on one of four randomly selected “pre-assigned” Articles of the Constitution. The Post’s program is the most successful in the state with three of the last five Arizona state delegates sent to the national competition having been sponsored by the Oro Valley Post 132. For information, contact Sven Olson at 520-610-1516 or [email protected]