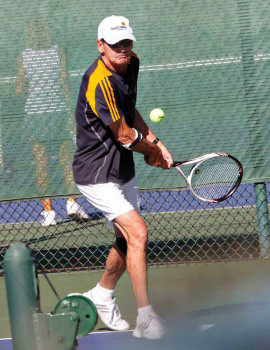 SaddleBrooke Tennis Club player and board member Bob Stocks, with his partner and longtime friend Barney Peet, won the right to play in the USTA League 65 plus 8.0 National Championships in March of this year.

Everyone who has played against Stocks is familiar with the determination shown in this photo as he winds up his ferocious two handed back hand in preparation for a driven stampede to the net. An Air Force fighter pilot on the loose with a target in sight, Bob is formidable; and affable.

Known for his courteous demeanor, civility and graciousness, Bob Stocks is warm and pleasant off court. On court, not so much – unless a tiger on the hunt is one’s idea of kindliness. Off court, he, like TJ Duffy, eats BBQ ribs and fried chicken with a sophisticated knife and fork. Back on court he is nothing less than a superb competitor.

To reach the finals, Bob and Barney played against teams from all corners of the nation including Hawaii, the Caribbean, Colorado and Florida. In the finals they met Missouri, southern and middle states from among the sixteen sectional teams that were seeded. Winning those matches, they went on to play the semi-finals against Colorado and then on to the finals against a tough Florida team two hours later. To their credit, Bob and Barney won their final match while their other team members lost a second set tiebreaker and, thus, the championship.

Of this prestigious accomplishment, Bob only says that it was the most significant experience of his 40 year tennis history.

We are proud of Bob Stocks. We are so fortunate to have him as a member and tennis buddy.