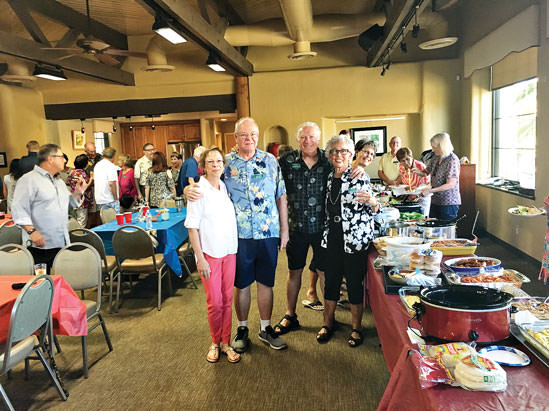 Hosts Maria and Mike Miller and Activity Coordinators Fred and Bonnie Barazani were a match made in heaven planning the Preserve potluck. And, popping out of nowhere was Cathy Quesnell, our local farcical photo-bomber, flashing her extra-large smile.

On Sunday, June 23, Mike and Maria Miller hosted the Preserve’s annual potluck and gobbledygook gaming night for 65 over 65-year-olds masquerading as kids at a playdate. The Play Pals met for a little mingling of the mind and mouth, mixing and matching names to faces, and brought something potable for themselves as well as something palatable to share.

Potlucks are like a box of chocolates – you never know what you’re going to get – and as luck would have it, we were in for a dire and deplorable disaster – dessertless in the desert. The person assigned to bring dessert, who shall remain nameless, was rumored to be a no-show. We will not disclose Ann’s identity, but if she was supposed to bring dessert, her last initial starts with T-Z. The sweet solution to this snafu was provided by sweetheart Dianne Fulkerson, who made five, yes five, desserts. Also assisting was her sweetie-pie accomplice Mona Sullivan and that Pastry Pâtissier Paddy Barazani, who made a snout-smackin’ crisp with apples she picked from her own backyard. Atta girl, Paddy! High five!

Our talented treasurer and even more talented whistleblower, Deborah Adinolfi, lit the match to start the activities with one shrill blow matching that of a six-alarm fire. The new playmates on the block, Don and Leona Crawford, Peggy and Lowell Hegg and Bob and Patty Stark were introduced, welcomed and given fair warning. Life at the Rigorous Retirement Retreat is the hardest, busiest job you will ever have, but also the highest paying. The payout comes in friendships, fun, community camaraderie and charity as well as the boundless beauty of our mountains and desert life. Doug Plescia, designer and implementer of the Preserve community website was applauded. We old computer curmudgeons will never be able to match wits with this sagacious senior savant, so he patiently and politely explained a few simple concepts any grandbaby fresh out of the crib could babble on about.

We didn’t have a clue as to what kind of a Mystery Match Game was looming ahead, but we knew it would be done in the SaddleBrooke One Activity Center dining room with the mind wrench, by Mrs. Barazani, garbed in a gaudy mis-matched outfit of white, scarlet and peacock. The first part of the event invitation boasted “Bonnie’s 2019 version of The Match Game.” We found no reference to such a game in Dumb Games for Old Dummies, but being game, we ate our brain flakes for breakfast with the hopes of playing with a full deck, raising our IQs to match the temperature and prayed that our noggins would click like dentures at a potluck. The second part of the invitation promised “no skill required.” An even match for all meant there was no need to rush over to secure a seat at a table next to any of our local rocker scientists, Gastrophysicists or Geriatric Geniuses still thinking themselves current members of Mensa.

Our Matchmaker Maven’s no-skill-required game didn’t even require a correct answer – just a match, or near match, to the answer that a randomly selected fool standing on display at the front of the room gave to quirky questions, such as the percentage of the Preserve populace always in bed by nine, the number of sold lots in Unit 44 or what Preserve women talk about most when they get together. (Husbands, Duh! Sorry, the 2019 revised Match Game rules state details not included.) At the end of the sparring match, Deborah, relieved it had not been necessary to be a whistleblower over any mayhem or monkeyshine, tallied the team scores and announced the top three winning teams – The Groggy Noggies, The Foggy Noggies and The Soggy Noggies. The sorry runners up, the Boggy Noggies and Smoggy Noggies were denied a rematch.

Great minds match alike, and at the end of the evening, we were all thinking that living at the Preserve is Game-Set-Match, making us all winners. And yes, we all left in time to be in bed by nine to rest up for whatever might be next on the Preserve’s playlist, and just an FYI, what happens in the Preserve does not stay in the Preserve.