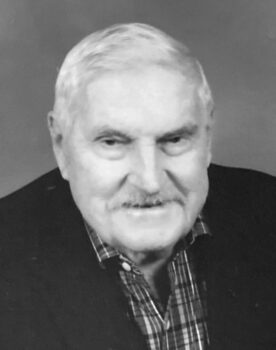 Leo Kramer was born March 19, 1925, in American Falls, Idaho, and was called to his Savior on Nov. 7 peacefully in his sleep. He was the middle of 17 children born to Adolph and Christina Kramer. He was predeceased by most of his siblings except his brother Ralph and sisters Arlene, Frieda, and Betty. He grew up in North Dakota living among relatives and people of German ancestry. He loved motorcycles and when he came to pick up his sweetheart Donna, for a date on his Harley, his future father-in-law told him to go home and get a car. He borrowed one and came back and then he married his sweetheart in the EUB church in Missoula in June of 1947. They lived in Missoula, Mont., for many years before making Arizona their home in 1969. Leo and Donna owned two Hallmark stores in east Mesa before moving to Sun Lakes. He was a plumber by trade and continued to work well into his 80s providing service to many in the Sun Lakes area. Leo cared for Donna for the major portion of her illness until Maria stepped in to help until Donna passed in 2016 and then cared for Leo until his passing. Our family is greatly indebted to both she and Rick for their ongoing care. Their children Richard (Maria), Wendi Fuller (Marvin Hook), and Kevin (Sonja) all live to carry on his legacy along with seven grandchildren and nine great grandchildren, numerous nieces and nephews as well as three special nieces. Both he and Donna were long time members of the First Baptist Church of Sun Lakes. A wonderful Christian man and no better father, grandfather, great grandfather, uncle, brother, and friend. “In my Father’s house are many mansions: if it were not so, I would have told you. I go to prepare a place for you.” John 14:2. We are happy in the knowledge that we will all be together again. Due to COVID restrictions, there will be no services at this time. Any condolences may be sent to First Baptist Church in Sun Lakes for the Lottie Moon missions.