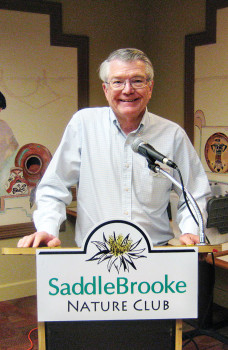 Newly elected President Ron Andrea called the January meeting of the SaddleBrooke Nature Club to order. After a short discussion of membership and upcoming events, Carole Chase introduced the speaker.

Richard is best known here in SaddleBrooke for helping to form the Master Gardeners Group. The leader of that group, Louise Grabell, was in the audience and helped to field some of the questions.

So many of us move to SaddleBrooke from places where landscaping around our homes was totally different. For instance, our yard in Cincinnati included many trees, grass and lots of shade plants. Names of plants and what was needed in desert landscape were totally foreign to us. Furthermore, when plants failed to thrive we had no clue what to do!

Pinal County Extension Director, Richard Gibson, can come to our rescue! Show him a branch or root from a struggling tree or plant and he can help diagnose the problem. He also suggested that a certified arborist be consulted, especially when dealing with large expensive plants like saguaro.

Mr. Gibson showed us samples of root systems that had totally twisted to one side of a tree. The problem? When the tree was young irrigation was placed on one side. As the plant grew, the irrigation did not surround the plant. Therefore its root system only went where the water was! If a storm brings wind to the rootless side of the tree, it may go down!

Roots are the first place to look when a plant fails to thrive. There must be a balance of energy between the top and bottom of a plant.

A tree’s root system should go out at least as far as its canopy. If the roots are restricted, leaves will drop and growth will be stunted.

Sometimes plants in SaddleBrooke fail to thrive because of the soil conditions. Caliche soil is common in SaddleBrooke. Caliche is a layer of soil in which soil particles have been cemented together by lime.

It is so dense that both water and roots cannot penetrate it.

Another suspect when a plant is struggling is too much pruning.

Mr. Gibson recommends that only 10% of a plant be pruned in any one year. If too many leaves are removed the plant is unable to get enough water and nutrients to grow.

The audience had questions answered during and after Mr. Gibson’s presentation.

SaddleBrooke Nature Club meets at 4:00 p.m. the second Monday of the month in the Coyote Room downstairs at the HOA 1 clubhouse.

February’s speaker is a poison control expert who will address poisons specific to the Southwest.

The Nature Club has a number of informative and fun field trips planned throughout the year. Check the website for further information www.SaddleBrookeNatureClub.com.