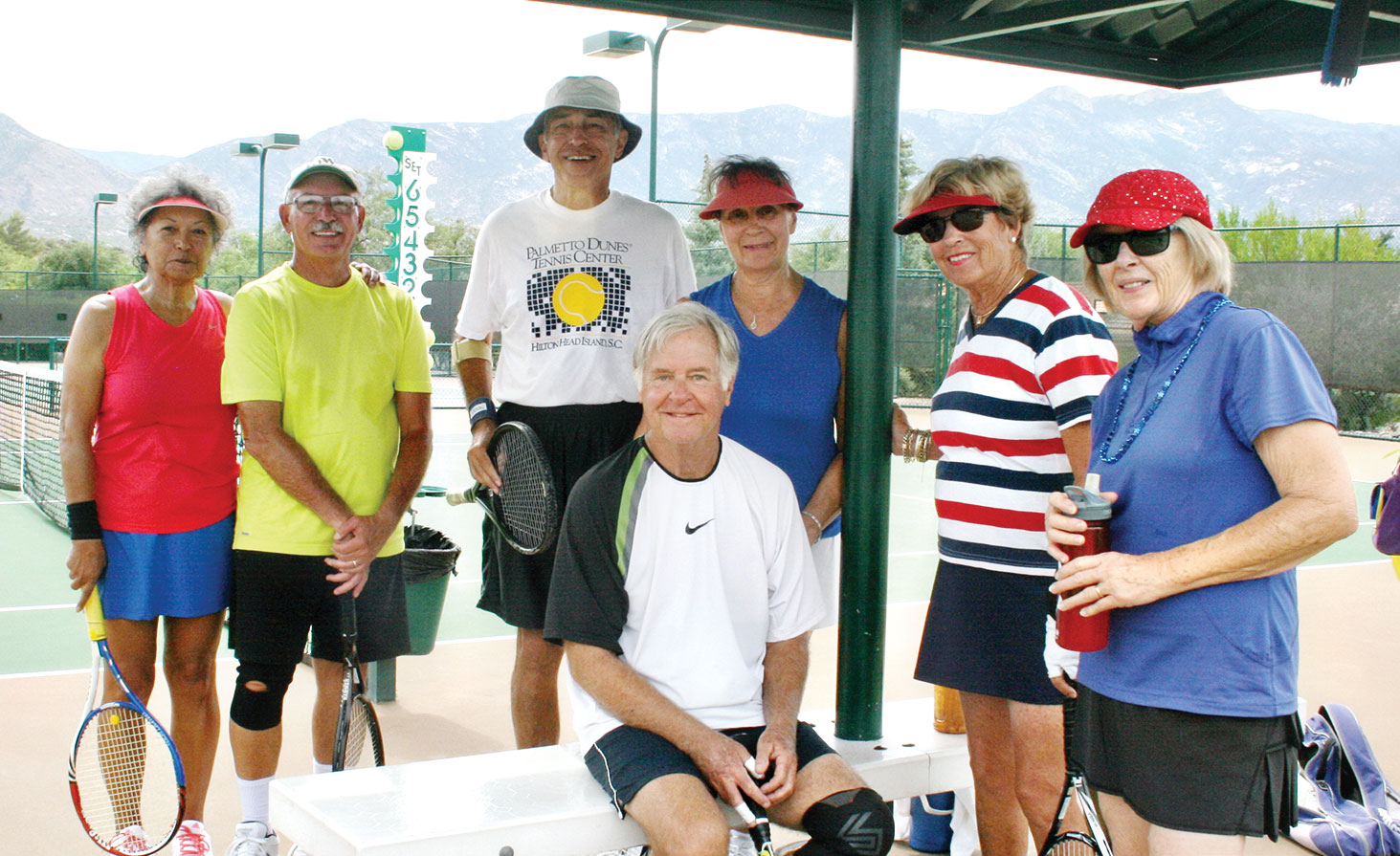 The SaddleBrooke Tennis Club was the place to be for the 2015 celebration of Independence Day. All hands reported for duty to make the event spectacular. First there was mixed doubles play followed by a spicy Chili Cook-Off, a delicious lunch, an introduction of new members, a cowboy poet and an introduction of the very first club president followed by awards for the winners of the Chili Cook-Off.

Nearly fifty club members volunteered to make the celebration a high success. Overall coordinator Debbie McGeehan said she received multiple requests to volunteer in every conceivable capacity. That is the spirit of the STC.

While the chili and lunch were free to STC members, guests paid a nominal $5 charge. Judy Renfro, assisted by her visiting sister Jan, manned the check-in desk. That’s how to put visiting family members to work around here.

The mixed doubles event was organized by Riley Jackson, Melanie Murphy and Debbie and Kay Sullivan who assigned 48 players to 12 courts. Then they had the winners and losers from each court play the winners and losers from other courts. Thus they skillfully managed to insure that everyone had the opportunity to meet and engage a wide variety of players. Who won the event, you may ask? Everyone! That was the point.

About a dozen members volunteered to set up tables and chairs. They included Rufus Renfrow, Kent Naugle, Richard Boyer and Chad and Sandy Stettler. Tablecloths, balloons, streamers and drink containers all served to make the event even more festive. Volunteering! That is what makes the STC such a successful venue for SaddleBrooke residents.

The serving line inside the Tennis Center was coordinated and staffed by Stephanie Thomas, Loretta Edgerton, Kendall Thomas, Midge Mollenkopf and Pam Willis. About one hundred members and guests moved quickly through the line and were treated to several salads, cornbread innovations and sauces. Chili – the main course – was served on the patio.

The SaddleBrooke Tennis Club, widely known for its red hot tennis matches, chose the middle of the summer for another hot item – a Chili Cook-Off. The competition began at noon on American Independence Day in the midst of the club’s Fourth of July celebration. Actually, some of the cooking began three days earlier. That’s when a few of the chili chefs began to marinate their meats in Chimayo or Hatch chili and other secret ingredients.

The Chili Cook-Off was under the highly qualified supervision of Debbie McGeehan who, along with Stephanie Thomas, Loretta Edgerton and Kendall Thomas, lined up the eight crock pots and slow cookers along with colorful signage identifying the name and heat intensity of each entry.

Delicious chili was served to STC members and their guests, none of whom can ever again be called a pilgrim or tenderfoot. No. They stood up to those spirited dishes right along with the real, well-seasoned chili-heads.

Now, CJ Wright created Tucson Turkey Chili while Joe Cucchiella and Phyllis Kushiner brought a veggie Silly Chili. Those offerings were delicious and left one’s ears connected to one’s head bone. In fact, none of the contestants actually made a concerted effort to blow anyone’s head off or to eviscerate the unsuspecting. Whether they were listed as mild, like Mom’s Special Chili prepared by Diane Ray or medium hot like Cozette and Dave Lamb’s Red Devil, the taste was something to die for. Well, maybe that is not the best characterization under the circumstances.

On the other hand there were the hot chili dishes. Some of them lived up to their name and served to make everyone surprised and relieved to see the green side of the grass when they awoke the next morning. Take Jay Wilson’s (third place winner) Texas Chili Rojo for example. The reader will easily understand that this chili is to be described only with the most endearing and delicate terms that can be afforded to a chili dish. The Cook-Off judges, however, may not have been Texans at all because they chose David Loendorf‘s delicious Grand Slam to be the Best Chili and thus the first place winner.

Second place winner, Mary Hlushko made a flavorfully hot Add-In Chili and Midge Mollenkopf gave us her Fire ‘N Ice. Yeah, like it was mostly fire and little ice.

The STC gives sincere thanks to volunteers from the Golder Ranch Fire Department, along with two anonymous STC members, for judging all eight entries and thus determined that, if they survived, they would award first place to David Loendorf for his Grand Slam Chili.

Join the STC for tennis and fun. The SaddleBrooke Tennis Club is dedicated to the health and enjoyment of SaddleBrooke residents.