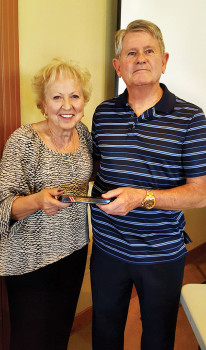 Jim gave an overwhelming and passionate talk on the Trail of Tears. Jim’s ancestry is Cherokee and Scottish. His Cherokee name is Wounded Arrow which means Medicine Man. He is a professor of Physiology and Microbiology, a Herpetologist, Master instructor Lamb’s Marital Arts. He holds several degrees including: B.S, M.S., PhD and Honorary DSc.

Jim and his wife have lived in SaddleBrooke since 1999.

The Trail of Tears or the 1830 Indian Removal Act signed by Andrew Jackson started the removal of the Five Civilized Tribes, including the Cherokee, on the Trail of Tears from their homelands in the Deep South to reservations in Oklahoma. It took over six months and more than 1000 miles in terrible conditions. Over 4,000 died from malnutrition, exposure and disease. Also known to Cherokee as ‘Nunna daul lsunyi’ or The Trail Where They Cried.