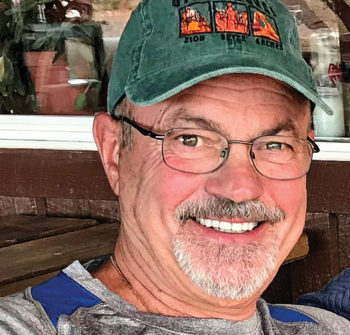 He’s still singing with the SaddleBrooke Singers, but Jay Hansen is stepping down as president. Just six months after he joined the singers 3.5 years ago, Jay was voted into office and during his tenure proved to have excellent leadership skills. We singers appreciate the hours Jay spent completing his duties and applaud him and the contributions he made towards maintaining and improving our organization.

The Hansen’s moved to SaddleBrooke just four years ago from their Medford, Ore., home of 20 years. At that time, Jay had no idea singing would dominate his activities. Jay states, “When I retired from pharmaceutical sales eight years ago, I started off playing more golf and thought that would be a big part of my retirement. Got my first hole-in-one on my first swing on my first day of retirement! I should have quit right then and there.”

Jay bought his first guitar when he was 50, but didn’t pick it up until he retired and joined his church’s worship team. After learning a few guitar chords, Jay began singing with the children’s ministry. That experience led him into singing with the Community Church choir here, and then the SaddleBrooke Singers and the Barbershop Chorus.

Now, singing, instead of golf, seems to fill most of his social calendar. Jay’s first time singing on stage was at age 66. Until then, his prior vocal experience involved turning the car radio up loud and singing along to Eagles or Chicago tunes. Jay never thought he’d have the nerve to sing a solo, but found being center stage made him happy. Singing “Lil Darlin’” for the 50s show two years ago was a magical experience for Jay. He says, “That is what I love about SaddleBrooke. So much time to rediscover who you really are and opportunities to find what you want to do with these golden years.”

When Jay isn’t singing, he and his wife Jean, a former family practice doctor, enjoy daily gym workouts, hiking, e-biking, walking their two dogs, and celebrating life with their many new friends here. They have been married 37 years. They both started life in Minnesota where they resided for 45 years before moving to Oregon and finally SaddleBrooke. Jay was raised in a large family of five boys and seven girls. His mom, now age 93, still lives independently, and her 12 children, 35 grandchildren, and 41 great grandchildren keep her surrounded with love.

After three fun-packed years, Jay is ready to turn his presidential responsibilities over to Stephanie Mattie. He believes with the new board and Steph at the helm, the Singers future looks solid. Come sing with Jay. You’ll love spending time with him and the rest of the Singers.