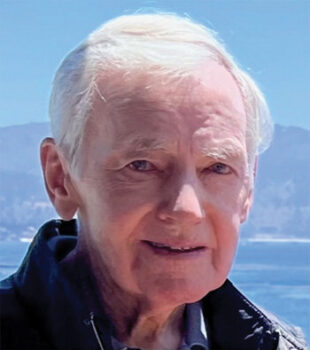 David K. Dodd passed away peacefully, Oct. 8, 2022. Born Oct. 31, 1932, in West Hartford, Conn., David was the son of Thomas Kilburn and Florence Marks Dodd. Graduating with a B.A. from Yale University in 1954, he was commissioned an officer in the U.S. Navy Reserve and, after serving 2¼ years active duty at sea as a LTJG on board the aircraft carrier USS Ticonderoga (CVA-14), he was deactivated.

He was a Korean War veteran and a member of The American Legion.

After then graduating with an MBA from Harvard University in 1958, he joined Merrill Lynch’s nascent corporate finance department on Wall Street. There he began a life-long career as an international investment banker, working initially with U.S. domestic corporate clientele and then with Japanese corporates seeking finance in the U.S. capital markets. The U.S.’s imposition of a tax on foreign borrowers in the mid-60s led to the emergence of the euro-capital markets overseas and in the early 1970s he was transferred to London, UK, where he worked and resided for nearly 20 years.

The disbandment of the Iron Curtain brought an onslaught of newly independent corporate entities seeking fast-track entry to the international capital markets, so in the mid-1990s David became an independent financial counselor, working initially with a banking client in the Czech Republic (where he was resident for 2 years), and then with a variety of corporate clients in the newly-emerging lesser-developed countries.

In 2009, on an overseas trip, he met Arlene DesJardins, a SaddleBrooke, Ariz., resident, and in 2010 he moved to SaddleBrooke, and to residence in an “active adult resort community” where, in addition to companionship with Arlene, he travelled internationally, played golf, and engaged in a variety of sporting and social activities. He had been an active member of his HOA Unit Social Committee, President of the SaddleBrooke Singles Club, and, as a member of the Elks, a member of the House Committee of the local Elks lodge.

He is survived by his companion, Arlene DesJardins, of SaddleBrooke, a sister, Dorothy Dodd O’Meara, of West Simsbury, Conn., and grandson, Lucas K. Dodd of Woodstock, N.Y., and Edinburgh, Scotland.