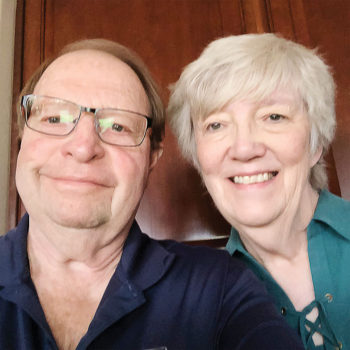 It’s particularly insightful to talk with couples who are navigating this new part of their lives together and hear what their struggles and decisions have been. One couple willing to share their story is Dick and Judy Kroese. As Dick tells it, he believes that his loss began in the 1990s but he chose not to do anything about it. In 2004 his hearing began to worsen and he decided to take the step towards some assistance because he saw that he and his wife were having an increasingly difficult time communicating on an everyday basis. At first, he didn’t want to wear his hearing aids, but he quickly realized that he could not get along without them. Daily, once he wore the aids, he could tell that his wife was now able to communicate with him without raising her voice. Judy adds that even though she has a degree in Speech and Language pathology and regularly worked with children with hearing difficulties, she would often respond to her husband by yelling, even though she knew it was inappropriate and unhelpful. She theorizes that when you know someone well, you develop a way of communicating over the years. When that changes due to increasing hearing loss, it’s difficult to change the pattern, even for someone who knows better. She suspects that may be true for many couples.

Recently, Dick took an even bigger step to improve his hearing. In November of 2018, he received a Cochlear Implant. He is very glad he took this step as his hearing totally changed the moment they turned the implant on. He hopes that everyone experiencing difficulty will consider taking a first step towards remediating their hearing loss. He believes that listening to testimonials such as his can help others make the decision to have a hearing test and receive the assistance they need. He says he wants others to experience life changing improvements, just as he has. I know, from speaking with Judy, that his decisions have been life changing and important to her, too. Dick hopes that the SaddleBrooke HOAs will continue to install and learn to maximize Hearing Loops in their meeting rooms, performance facilities and public spaces. He also feels that the Peer Discussion for Better Hearing Group has been very helpful and he wants to see it grow and thrive.

Dick and Judy (and the rest of the Peer Discussion for Better Hearing Group) invite you to come and learn how to resolve issues around hearing loss and/or help a friend or neighbor here in SaddleBrooke. Learn how to be an advocate for yourself and others. We meet on the second Thursday of the month at the MountainView Bistro Building from 10:00 a.m.-noon. If you have questions, or need more information, please contact Dick or Judy Kroese: 520-360-5789 [email protected] or Jennifer Jefferis 360-909-6212 [email protected]