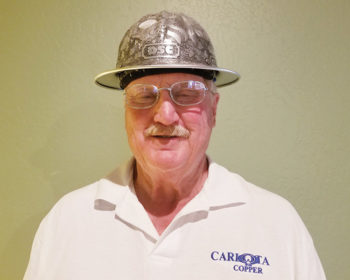 The Institute for Learning in Retirement (ILR) is pleased to have David Cook as an instructor in the ILR program. David was born in Needham, Mass., and grew up in the New England area. He went to Bates College in Lewiston, Maine, and earned a B.S. degree in geology. He moved to Arizona in 1973 for graduate studies in geology at ASU. David then took a job with the Christmas Mine in Globe as a geologist. After 10 years at the Christmas Mine, he had the opportunity to work for Rayrock Mining Company in Nevada as a mine manager at the Dee gold mine and the Marigold, Daisy, and Pinson gold mines. David returned to Arizona in 2006 to work for Quadra Mining at the Carlota mine in Globe. David has vast experience in the gold and copper mining industry. Overall, he spent 42 years as a geologist in mine operations and as general manager at mines in Arizona and Nevada.

His expertise in mining took David and his family to many different places to live, including the Christmas town sites of Phoenix; Elko, Nev.; Winnemucca, Nev.; and Ely, Nev. During his career, David has presented many seminars and lectures at the Bullion Plaza Museum (Miami, Ariz.), the Arizona Geological Society, and the Society of Mining Engineers. In 2018, David taught an ILR course “Mining and Mining History” to share his knowledge on this interesting subject and its historic role in the development of the western United States.

In 2015, David and his wife Peggy Anne retired to SaddleBrooke. He found the ILR and taught a course about his lifelong hobby, baseball. He played baseball in little league, high school, and college and over the years has read over 100 books on the subject. He also has collected a lot of baseball memorabilia. His favorite collectible is a jersey worn by Ted Williams in the 1950s. He plays golf, hikes, and is an avid woodworker making items for the house and for grandkids. David and Peggy Anne enjoy SaddleBrooke and when the temperature gets hot, they escape to their home in Pinetop. ILR is pleased to have David on the faculty and looks forward to his future classes. For more information on the ILR, go to sbilr.org.