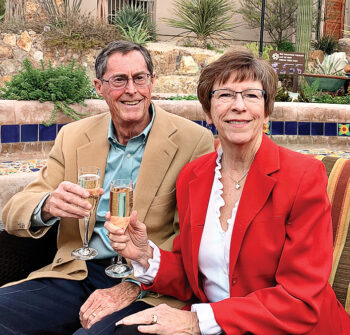 The Institute for Learning in Retirement (ILR) was founded in 2005 by Dr. Joel Waldstreicher and 10 members on the initial board of directors (BOD). The first courses were conducted in 2006 and to date we have offered over 350 courses to the SaddleBrooke community. Today I would like to introduce you to Riley Jackson, one of the founding board members and is still on the current BOD. He is a great asset to the ILR and has served multiple functions over the last 17 years. His official title is the treasurer of the ILR.

Riley was born in Fort Benning, Ga., an Army brat, and with his family lived all over the U.S. as well as several years in Japan and Germany. He graduated high school in Heidelberg, Germany. Since he was young, he knew that he wanted to be an engineer, and in 1962 he went to Georgia Tech to study Engineering. Riley earned a B.S. in Electrical Engineering in 1967. He worked for seven years at Texas Instruments doing electronic design and was motivated to get an M.B.A. degree. He moved to California, enrolled in U.C.L.A. and earned an M.B.A. in 1971. Combining his skills, he took a job with Electronic Data Systems (EDS) as a skilled computer programmer and manager. He worked for a short period of time in Cincinnati, Ohio, and then was transferred to San Francisco, where he worked for EDS from 1971 to 1982. From 1983 to 1988, he worked for a small consulting firm in San Francisco as their Account Manager. In 1988, he had an opportunity to join Sun Microsystems, a rising star in Silicon Valley, as a programmer, manager, and consultant, where Riley spent the next 11 years. His career in Silicon Valley was a great experience as he had fun with computers, had a home in Marin County, and earned bay area wages. It just doesn’t get any better!

Then it did, he met Kay Sullivan, who also worked in the bay area for an executive recruiting firm, and he knew that Kay was the right one for him. They dated for a year, married in 2001, and decided to settle down in SaddleBrooke. They are both enjoying all the amenities in SaddleBrooke. Kay is an accomplished artist and is the president of the Southern Arizona Watercolor Guild and enjoys golf and tennis. Riley is an excellent athlete and totally enjoys tennis and bicycling. He is a member of the SaddleBrooke Tennis Club and the Spanish Culture Club. It’s a pleasure to work with Riley and watch his intellect at work.