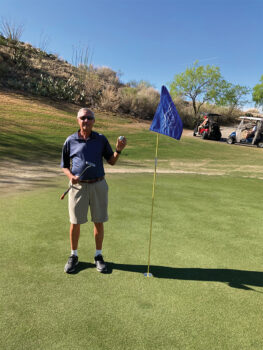 Mark Kunnen with his ball that found the cup on number 6 at the Preserve.

While playing at the Preserve on April 6, Mark Kunnen thought he’d lost his ball on hole number 6. He and Brian Gallup were looking for it in the desert at the top of the steep slope to the left of the green.

While they were searching, another player in his group, Larry Scott, putted from the front of the green to within three feet of the pin. When he went up to mark his ball, Larry said, “Hey, there’s a ball in the hole.”

So yes, Mark had lost his ball—in the cup. He had struck an 8-iron from the tee to a blue pin, 130 yards away. His ball had landed on the slope, kicked to the right, and rolled into the hole.

This is Mark’s second hole-in-one but his first since moving to SaddleBrooke in 2002. Well done, sir! 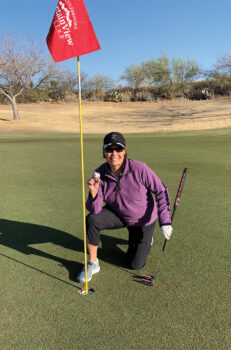 Egads and golf gadzooks galore! March 23 was a thrilling and terrific trifecta for Cathy Quesnell during a MountainView/Preserve Women’s Golf Association (MPWGA) Tuesday play day. There’s a first time for everything, and everything was first for Cathy—first place Ace of the Month for gross, with a score of 76; first place in her flight, tying for overall first place in the Stableford event; and first hole-in-one! Winning for Cathy is as easy as one, two, three, and a par three is as easy as one!

From the tee box on MountainView number four, Cathy, Kim Cox, Linda Linegar, and Linda Schauer enjoyed a little banter and joking about the color of the flag as they eyed it from 101 yards away. The indecisive, slightly colorblind foursome thought it was probably a red flag, but with the early morning sun in their eyes, it looked more like a pinkish flag, a nice complement to Cathy’s pink and white soccer motif Callaway ball. Cathy thought the placement made it a blue flag, so technically, in technicolor, that would make it a reddish-blue flag, which according to Isaac Newton’s color wheel, would make it a purple flag. The group was still engaged in flag folly and golf guffaw as Cathy selected an 8-iron and, applying Newton’s laws of motion and gravity, teed up to bounce the ball in front of the flag in question, so that it would roll up to the hole and fall in. Right there in living color, that’s exactly what happened. Arriving at the hole, the suspect flag showed its true colors, red with white lettering. Cathy attributed her hole-in-one to pure luck and cyber-celebrated with her husband Dave by text.

Twelve years ago, during a game of Bunko in Castle Rock, Colo., Cathy was invited to join a women’s golf club. It was then and there that she decided to become a serious golfer. One might wonder what would take such a good golfer with a handicap index of 13 so long to get her first hole-in-one. Q may be towards the end of the alphabet, but 12 years is a long time to wait patiently in the queue. The theory of senior confusion suggests that it is likely due to her usual ball of choice, the schizophrenic pink and white ball that has been stuck in an identity crisis, not knowing whether it was a golf ball or soccer ball. The troubled ball should have gotten a clue since Cathy has never kicked it, nor does she own a foot wedge. Perhaps that morning Cathy had a little lesson with her soccer/golf ball about the difference between a net and a cup and a goal post and a hole post, and explained that the goal is the hole. Now that Cathy and her little soccer/golf ball are one, there is no doubt frequent holes-in-one will become her new normal.

Cathy has been a member of the MPWGA for four years. This year she is co-chairing the Coyote Classic, and as always, will help with the cancer tournament. She enjoys competing against the course and being outdoors, even though she is allergic to every single living thing in our beautiful desert wonderland. She appreciates how hard the MPWGA board works for our well-run organization and says she couldn’t ask for a better group of people to spend life with.

It is pure luck that Travelinda, LLC is our hole-in-one sponsor. Owner Linda Stack rewards us when we have the ultimate golf hole and helps us experience the ultimate travel adventure.