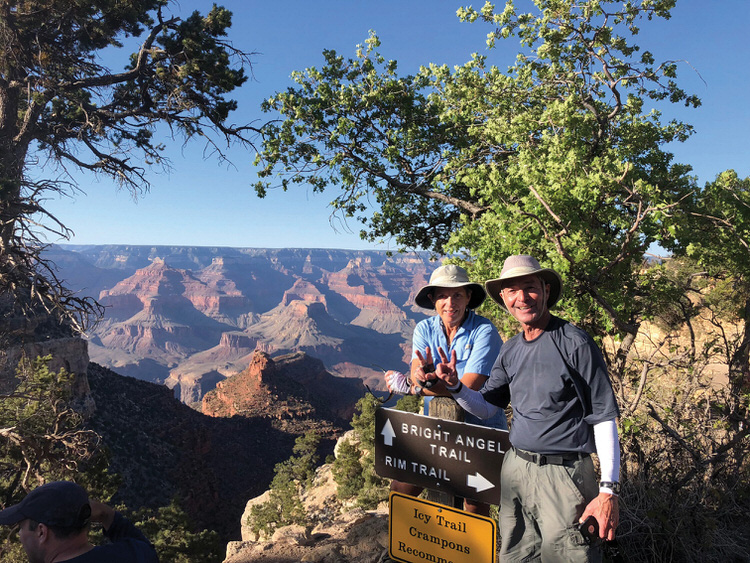 Tim and Terese Butler at the Grand Canyon

It has certainly been a busy 12 months for Hiking Club President Tim Butler. He probably didn’t anticipate that his term would be filled with so much work and activity. However, his background and past experiences, coupled with his attention to detail and dedication to perfection, helped make Tim the perfect fit for this leadership position. With undergraduate and graduate degrees in plant sciences, Tim’s expertise in identifying desert plants allowed him to pass along his knowledge to hikers.

Tim spent most of his professional career in the agricultural chemical industry, where he worked in R&D, sales, and consulting. In his 20s and 30s, Tim was an avid backpacker, rock climber, and snow skier. He worked on the ski patrol at a Northern California resort and accomplished the rare feat of skiing one million vertical feet over several years in Jackson Hole. He also loves flying and received a pilot license and is instrument rated.

In 1991, Tim met his future wife, Terese, after discovering that both were avid bicyclists. At the time, Terese was also a scuba diver, and she treated Tim to lessons as a birthday present. After going on a warm water dive trip together, Tim decided he liked warm water vacations much more than cold ski vacations. The Butlers have been on dive vacations around the world and are accomplished underwater photographers.

Tim and Terese now spend most of their vacations on bicycling tours, river cruises, and hiking trips. Two of their more memorable trips include hiking in the Dolomites in Italy and hiking rim-to-rim in one day in the Grand Canyon in 2018. In March, they took a trip to Peru and the Galapagos Islands and have plans to hike in the Swiss Alps this summer.

During his term, in addition to normal presidential duties, Tim has overseen the revision of the club’s liability forms and bylaws, managed COVID protocols, made valuable contributions in audit and budget reviews, helped staff the Activity Fair, and was a presenter at the New Hiker Orientation program in February. He is one of the most popular hiking guides. The club awarded him the 2019 Trailblazer Award “for meritorious service above and beyond simply being a member of the hiking club, for performing duties greater than expected, and for exhibiting leadership that we all admire.”

Additionally, Tim has also been a positive influence on many club members, guides, and officers. As newly elected V.P., Ruth Caldwell recently noted, “Tim is such a wonderful leader in many ways for our club. I would not have become a guide, much less chief guide and now vice president, without his encouragement and mentoring.”

Tim’s leadership skills guiding the club this past year have been exemplary, and our members appreciate and applaud his effort. Thank you, President Butler, for your commitment to making ours a better club and for a job well done!