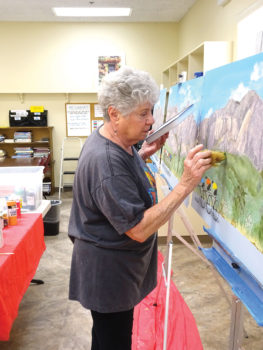 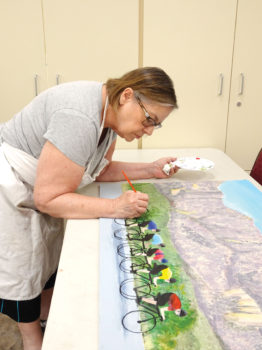 What has 74 wheels, is 36 feet long and took more than 250 hours to complete? It’s not a heavy-duty semi-trailer. It’s the new mural installed on two walls of the spin cycling room at MountainView. It was created by members of the SaddleBrooke Fine Arts Guild.

It all started last year when several spinners were brainstorming about how to make their surroundings more interesting during spin classes. They approached fitness center staff with the idea to get something put on the walls above the mirrors. The staff, in turn, approached the SaddleBrooke TWO board and the SaddleBrooke Fine Arts Guild to see if the Guild would be interested in partnering on a project.

“The room is challenging because it has 6-foot-tall mirrors. That only leaves a couple of feet available above the mirrors,” explained former Guild president Gail Kolinda. “One wall is 20 feet long and the other side is 16 feet. We decided that if SaddleBrooke TWO would cover the cost of supplies and materials, we’d see if we could get together a design and some volunteer artists to do the work.”

A brainstorming session among artists resulted in a design featuring cyclists riding along a road with the Catalinas in the background as if you were viewing the scene from various spots along Oracle Road. To flesh out the design, Wayne Ufford roughed out ideas for how the cyclists might be portrayed cruising down the road. Meanwhile, Kolinda took photos of the Catalinas at various spots along Oracle Road.

Ufford, who had previously created a smaller mural, suggested using panels of a quarter-inch MDF and then securing them to the walls with channel mounting. “We started out ordering 2×8 panels but we subsequently settled on 2×4 panels because they were easier to handle,” he said.

Once the design was finished and agreed on by SaddleBrooke TWO, the work began in earnest in July. “We set up in the Topaz Room at MountainView,” said Kathleen Brodkin, Guild president. We lined up a series of nine easels and numbered the panels on the back. This way, we could place them side by side to check our work as we went along, so that the mountains and roadway would be properly aligned. And we could move individual panels around as we worked on various elements.”

Brodkin completed much of the preparatory work and painted the roads. Kolinda came in with a photo montage of the mountains and sketched in the skyline. Ufford labored on the 37 cyclists featured on the two walls. Joanna Voisine did much of the landscape scenery and the sky.

“We worked an average of three hours a day, four days a week beginning on July 9 and we finished the varnish coat the week of August 20,” noted Voisine. “We used house paint and acrylics, brushes, sponges and fingers. Wayne even custom built a compass so that we could get the bike wheels right. Before that, it was taking about two hours to paint each wheel—and we had 74 to complete!”

“It was a great project and we hope the spinners and others enjoy it, but next time, perhaps we should tackle something smaller,” Brodkin smiled. “Maybe just one or two panels.”