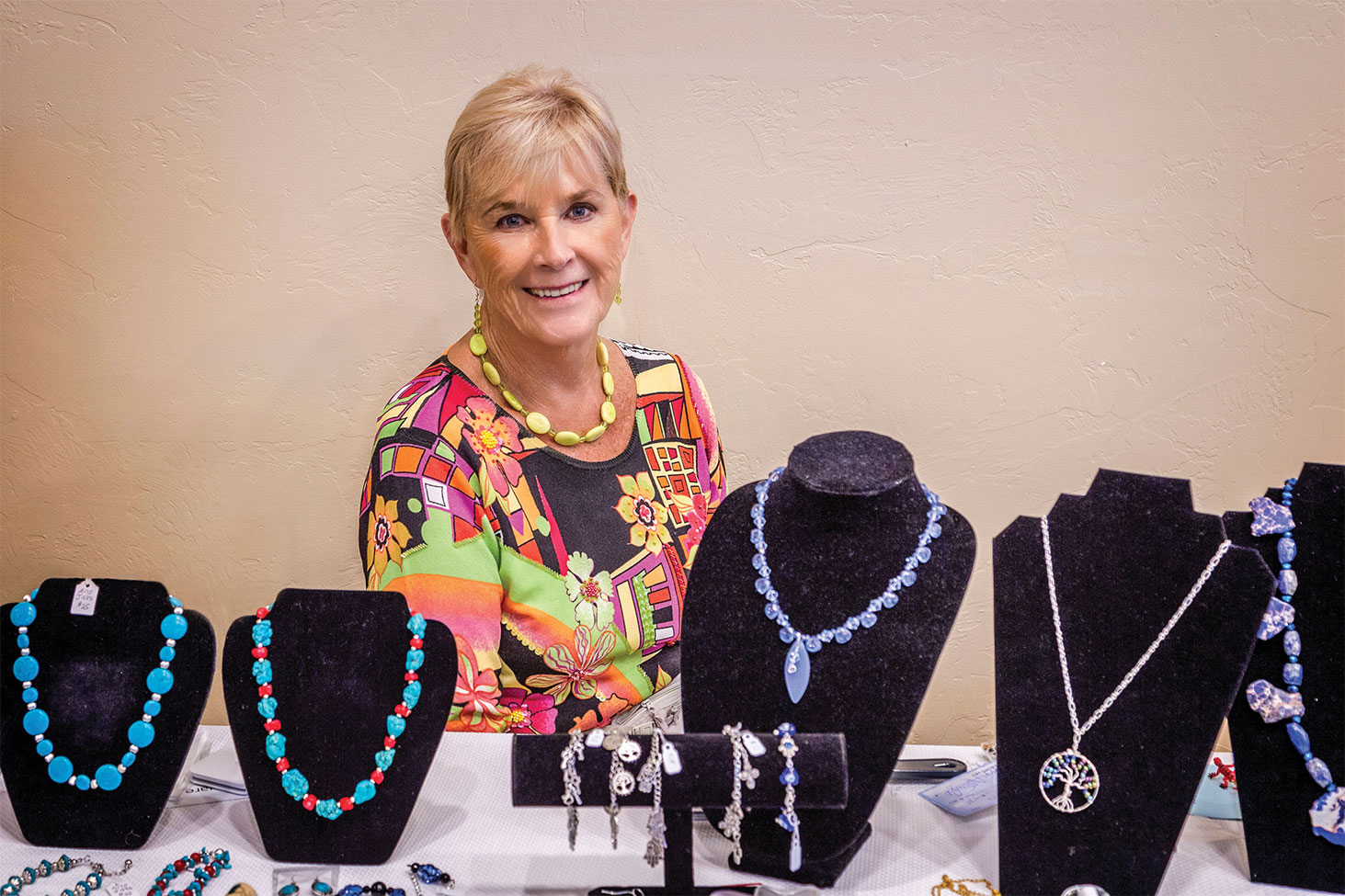 Dixie describes herself as a ‘Jack of all trades’ and exhibits a wide variety of arts and crafts items in the Gift Shop gallery. Geckos form her most prominent display, but she also creates jewelry, cards, pottery/ceramics, fabrics etc. A SaddleBrooke fabric painting class she attended in 1998 launched her artistic career (“I was previously just too busy,” she says). Owning her own kiln is a matter of pride for Dixie. It is so much fun to load it up with ceramic/pottery pieces and then the next morning see the transformation the glaze and colors have brought. She works in the utility room, in the guest room or in the kitchen where she can listen/watch TV or wherever the mood takes her.

Later, Dixie became a nursing home administrator and opened an assisted living facility in the early 1990s. She retired from Salem Hospital in Salem, Oregon where she was the Director of the skilled Medicare step down unit.

She met and married her current husband, Dave, with whom she has had a most enjoyable life. Between them, they have raised five children and have ten grandchildren.

Dixie considers herself an adventure traveler, wanting to see, smell and taste everything everywhere she goes. After college she toured Europe on a bicycle and in a VW bus. She continued her adventure travels with her husband returning to Europe and traveling to Africa, Egypt, Turkey and a year ago, toured China, Vietnam, Cambodia, Thailand and Laos. Their adventures while scuba diving, however, top the list and Dixie feels she has seen the Caribbean from under water. For five weeks each year they visit Maui where she recharges her artistic batteries.

Dixie and Dave moved to SaddleBrooke from Salem, Oregon in 1997 and, like everyone else, made their decision to stay soon after they came over the hill. Dixie joined the Gift Shop team about two years later. She enjoys sharing her creations at the gift shop which also enables her to create more. She has served on the board and was secretary for a few years. “Meeting visitors and chatting with them while working in the Gift Shop is a lot of fun,” she says.

Dixie is a very busy, active person. She has enjoyed such activities as golf, tennis and line dancing to name a few. She once held a private pilot license and has practiced sky diving, fishing and bird hunting. These days she plays bridge, poker, canasta and mahjongg. Her inimitable philosophy is, “Life is short, have fun!”