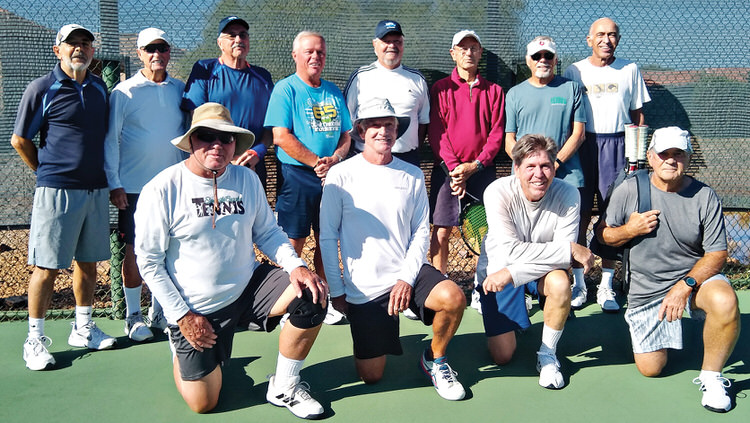 You often think of doubles tennis as a group of four guys or gals, or a mixture of both, getting together on a regular basis for a friendly game of tennis. Well, in SaddleBrooke, we have many different doubles groups playing at different times and days of the week. Most people are familiar with organized play, or OP for short. OP tennis play is handled by the coordinators of the Tennis Club. You sign up online, get paired with other players with similar skills, and are assigned to a court at a date and time that you have chosen. It’s a great system, and most Tennis Club members use OP a couple days a week.

The one I’d like to write about is a Friday morning group run by Randy Zimmerman. It’s been around for about four years and can have from two to five courts going every Friday. Most often, there are more courts assigned from September through April.

What’s fun is the way it works. There are always two main courts, and these are filled by winners from the week before. Ah ha—everyone assigned to the main courts can’t win every week! That is correct. Two of the players are sent down to the “minors” and have to work their way back up to the majors. Two players are brought up from the minors to play on the main courts. The partners for the main courts for the following week are randomly selected, so the winners of the week before have new partners for the following week. A new partner provides new dynamics. No provisions are made for us poor lefties, and sometimes we lefties get stuck with another right-minded person. If you’re a lefty playing with a lefty on SaddleBrooke tennis courts, you would rather play after 2 p.m., but that’s what random selection is all about. What’s really important is that the following week, almost everyone gets to play with new partners. If not, they are placed on the sub list so they can be called if an emergency comes up for any of the players scheduled to play.

The social aspect is also fun. After finishing tennis, most often, everyone brings something to drink and share. We all sit around and provide interesting conversation, and you never know where the conversation might lead us. Every week, I believe each of us learns something new. We also learn about some of the skills and experiences of our fellow tennis players. As long as we stay away from politics, it works out great.