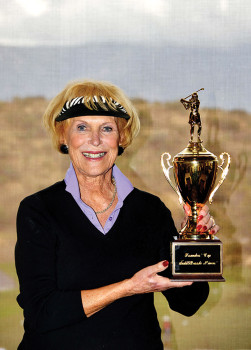 2015 promises to be another great year for the SaddleBrooke Lady Niners and we are off to a great start.

Our first event of the New Year was the Founders Cup. This event is to honor the ladies who, with great foresight, started the SaddleBrooke Lady Niners in 1990. The first Founder’s Cup (called the Liz Carlson Cup in those days) was held in 1997 and we’re still carrying on the tradition. This year’s winner is Kathleen Weiss.

We use this meeting as a welcome to all new and returning members and to introduce the new Board members and Committee Chairs.

On Tuesday, January 20 the Niners played the first of four qualifying rounds of the AWGA sponsored State Medallion. Low net and low gross scores from the best two rounds are averaged to determine who will play in the State Medallion Tournament to be held later in the year.

Congratulations to our own Andy Higgins. He was chosen as the Best Assistant Golf Professional of the Year for the SW section of the PGA. Way to go, Andy! We knew it all along.