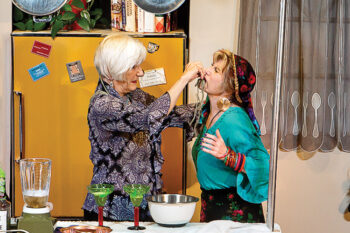 Over six November nights to nearly sold out crowds, SaddleBrooke was served a delightful dinner theatre production Cooking with Gus. A patron attending the first night said, “It gave me goosebumps at one point, and I laughed so hard my ribs hurt.”

Who can forget the show’s food fight, Connie’s rendition of a chicken (who laid an egg), JP getting his bottom stuck in a bowl of batter, Susan regressing under hypnosis, and her dance with light-on-his-feet Tim? The stage was even set with a harvest gold refrigerator.

Directed by CCP co-founder Shawne Cryderman with Judi Brauns as producer, this was CCP’s first fall show. Nine years ago, in the last fall theatre production, Tim Morsani played the lead in PrimeTime Players’ Rehearsal for Murder. He will be directing CCP’s next production The Outsider which will have performances at both SaddleBrooke One and SaddleBrooke TWO beginning the week of March 8.