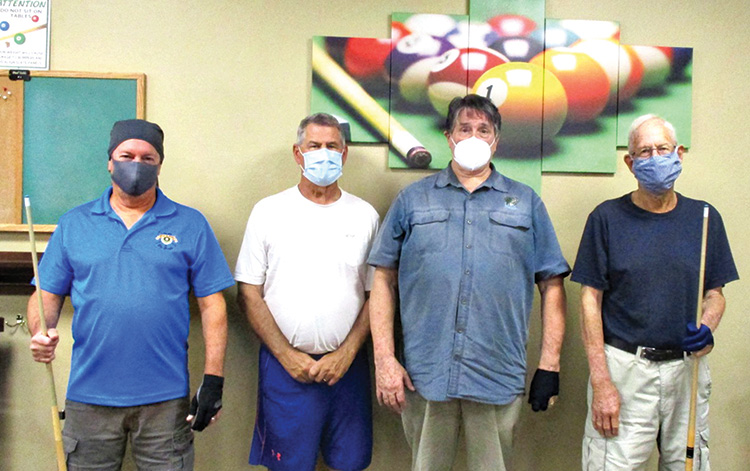 On July 18, the PPB Billiards Club hosted an 8-Ball Singles Tournament in SaddleBrooke One’s Catalina Recreation Center (CRC) billiards room. The format was single game, double elimination. Due to COVID-19, all participants were required to wear face masks and sanitize their hands before every game. Only eight players at a time were allowed in the billiard room with the other participants having to wait in the card room or outside to socially distance. Everyone seemed to endure the masks even though some had difficulty breathing easily and some had their eyeglasses fog up while playing.

Dominic “The Doctor” Borland’s path to fame over a field of 16 skilled 8-ballers was as follows: he started by defeating in order Dick Steinsvagg, Bob Ogle, and Chris Madsen. Then he lost to Steve Searl, which sent Dominic to the loser’s bracket. In the loser’s bracket, Dominic beat Bob Ogle to earn a chance to get even with Steve Searl who put him in the loser’s bracket. Dominic would have to beat Steve twice to take the title. This was not Steve’s day; Dominic defeated Steve twice to come out on top in this tournament. Congrats, Dominic; your play today was by far the cream of the crop!

The PPB wants to extend a big thank you to all our participants and sponsors. On a special note, we had three brave PPB ladies, Nancy Barrett, Romayne Trudo, and Julie Ferguson, who jumped into the 8-ball competition against 13 male competitors. Good job ladies, especially our top lady Julie Ferguson with a win over Steve Wiley and a Top Lady Playoff win over Nancy Barrett.

The 8-Ball Singles Tournament started at 11:30 a.m. and lasted almost three hours with 31 games of 8-ball played. We competed and met some new friends that shared our passion. That is a good day! Rack ‘em up!