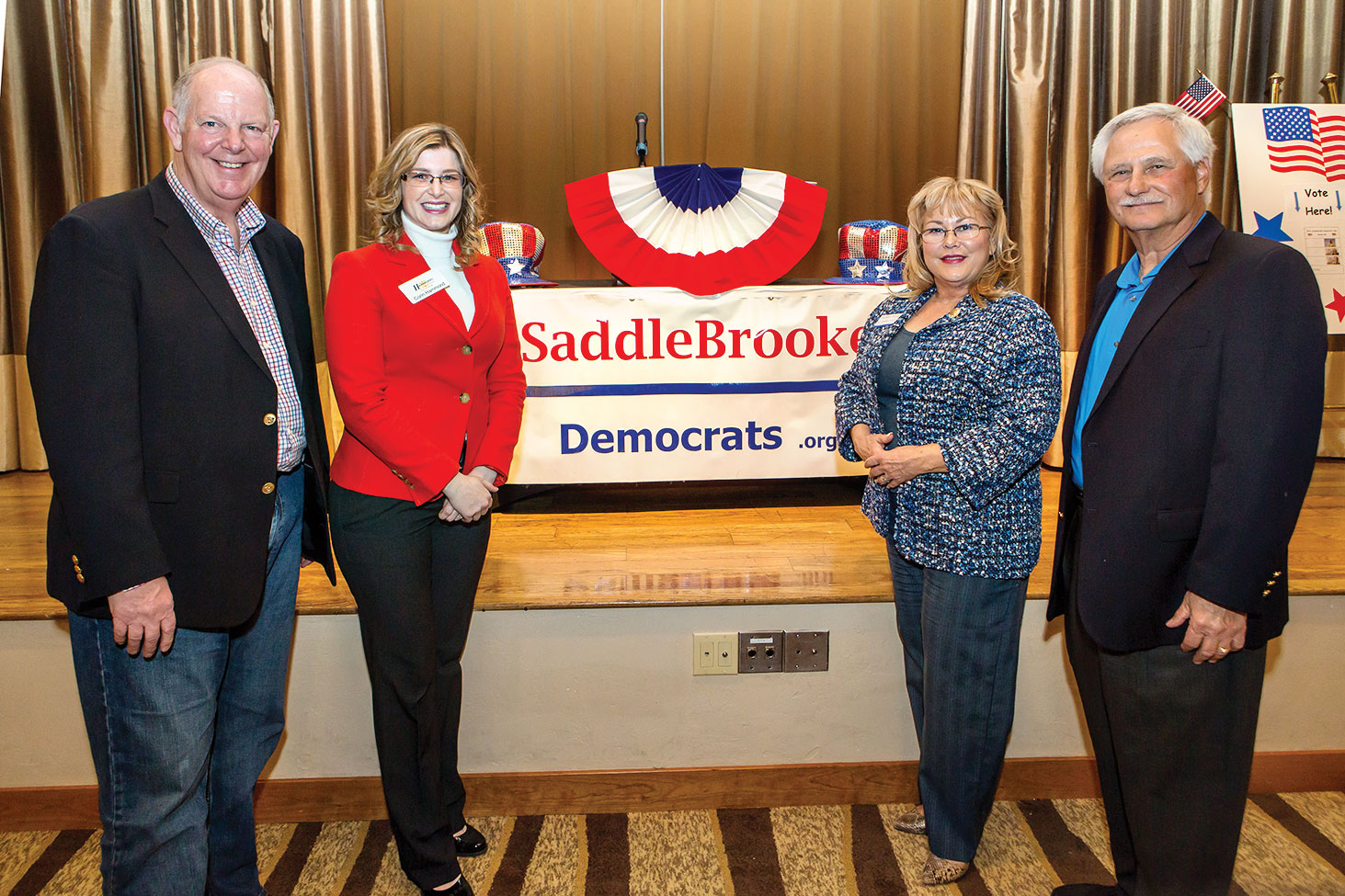 The SaddleBrooke Democratic Club held its 2016 Donkey Kickoff Meeting on January 31. This annual meeting is not only a great social event for SaddleBrooke Democrats but serves as our major fundraiser as well. A capacity crowd in the MountainView Ballroom enjoyed the opportunity to meet and greet a large number of Democratic candidates running for office in Arizona. These candidates included Ann Kirkpatrick running for the U.S. Senate, Tom O’Halleran running to replace Ann in the U.S. House of Representatives, Ralph Atchue and Barbara McGuire running for State Senate from LD11 and LD8 and Corin Hammond running for the State House of Representatives in LD11. Our speaker for the evening was University of Arizona Professor Michael Dues who provided the audience with many useful tips on how to more effectively communicate Democratic Party Values and our position on issues. A good time was had by all and everyone is looking forward to a lively election season in 2016.

On February 9 we had the pleasure to welcome Terry Goddard to SaddleBrooke as the speaker at our monthly meeting. Terry, former Phoenix Mayor and Arizona Attorney General, introduced club members to his Citizen’s Initiative to shed the light on Dark Money in Arizona. His proposed constitutional amendment would require disclosure of the original source’s identity of all campaign contributions of $10,000 or more for all elections in the State of Arizona. Failure to comply would be met with severe penalties. Terry fielded many questions from club members about his proposal. In the end, the consensus was that his initiative should be worthy of significant bipartisan support. Members readily signed available petitions and volunteered to assist Terry in the signature gathering process.

Our next scheduled monthly meeting will be on March 8. The guest speaker at that meeting will be Barbara Lubin, Political Director for the Arizona Democratic Party. Barbara will be providing us with a current Arizona Legislative Update. She will cover the latest action on pending bills and provide information which we may want to use to contact our representatives to voice our opinions concerning pending legislation.

Each regular monthly meeting of the SaddleBrooke Democratic Club is held on the second Tuesday of the month at 3:30 p.m. in the HOA 1 Activity Center, 64518 East Galveston Lane, SaddleBrooke, Arizona 85739.