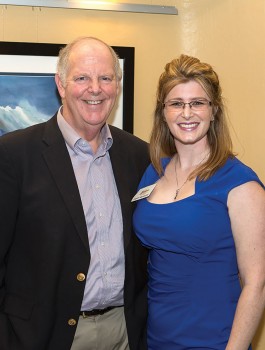 On November 10, our guest speaker was Tom O’Halleran. Tom has declared as a Democratic candidate running to fill the opening in Congressional District One as a result of Ann Kirpatrick’s decision to run for the U.S. Senate. Tom, a resident of Sedona, was previously a Chicago police officer and homicide investigator, a member of the Chicago Board of Trade and a consultant on design and integration of technology for financial trading floors. Tom spoke of his goals and objectives in representing the citizens of Arizona in the U.S. House of Representatives.

Also speaking at the meeting was Corin Hammond. Corin is a Democratic candidate running for election in LD11. Corin shared her thoughts and motivations to mount her campaign to represent us in the Arizona State Legislature. Both candidates were well received and took numerous questions from club members in the audience.

Our scheduled speaker for our December 8 monthly meeting is Ruth “Bunny” Davis who will be making a presentation on the embodiment of our values, rights and responsibilities within the U.S. Constitution and the Declaration of Independence. Her approach to these subjects not only provides a good review, but new insight into how tightly our Democratic values align with these sacred documents.

Each monthly meeting of the SaddleBrooke Democratic Club is held on the second Tuesday of the month at 3:30 p.m. in the HOA One Activity Center, 64518 East Galveston Lane, SaddleBrooke, Arizona 85739.