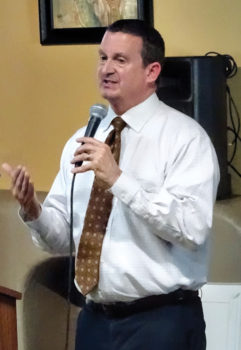 We were treated to a very lively round of discussion on the merits of Prop 123 at our April 12 meeting. Representing the “Vote Yes” faction was Andrew Morrill, president of the Arizona Education Association. His main points were that we desperately need the money now to stem the flow of teachers leaving the state and create some stability to education funding in the State of Arizona. Representing the “Vote No” interests was Andrew Gardner from the Committee to Vote No on Prop 123. Andrew’s main points were that the proposal robs future education funding to solve a near term issue. Having two young children, he was very concerned about what happens 10 years from now when the effect of this proposition expires. Both speakers spoke passionately about their positions. It is a complicated issue. Though no clear resolution emerged from the discussion, much information and opinion was shared. Some club members have changed their minds on both sides of the issue as a result. The Democratic Club of SaddleBrooke thanks both speakers for their participation.

Next month’s meeting, on May 10, will feature Donna Gratehouse. Donna is a political activist who lives in Phoenix. She is a prolific writer who is featured on the BlogForArizona and Democratic Diva websites. She has also been published by the New York Times. Active in Arizona politics, in 2006 Donna ran for a seat in the State Legislature in LD 20. She is excited about speaking to our group and has a unique perspective on the activities of our Legislature in Phoenix. You won’t want to miss this.

Each regular monthly meeting of the SaddleBrooke Democratic Club is held on the second Tuesday of the month at 3:30 p.m. in the HOA 1 Activity Center, 64518 East Galveston Lane, Tucson, Arizona 85739.