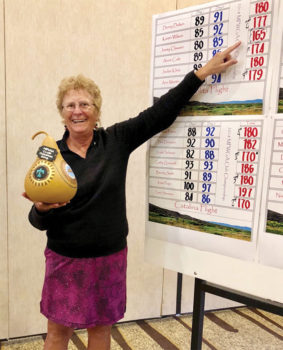 Janey Clausen shot a two-day total score of 165 (80 at The Preserve on November 13, 2018 and 85 at MountainView on November 14, 2018). With no competitor finishing less than 170, Janey won the MPWGA 2018 Club Championship. This is her third time winning this coveted title, as she was also MPWGA Club Champion in 2012 and 2015. During an after-game-interview Janey was asked to describe her victory. In her usual down-to-earth style, she replied, “I just happened to play better than everyone else.” Congratulations, Janey, for “another” impressive win!

The beautiful Championship Prize Gourd was designed and crafted by SaddleBrooke’s own artisan, Donna Vargas. Donna was thrilled to be able to contribute to MPWGA in such a personal way and Janey loves it!

Thank you to Healthy Skin Dermatology for being our Club Championship sponsor.