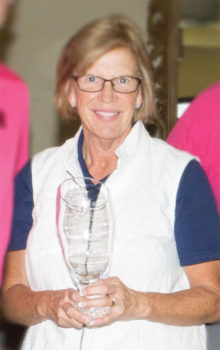 Mary Kay Nordhill shined the brightest of the 42 star-studded Sparklers stylin’ in red, white and blue who played in the MountainView Preserve Women’s Golf Association’s President’s Cup. The players were grouped by handicap into six flights, each named in honor of a past president of the United States. This was the 19th year for this 36-Hole Net-Only championship played March 19 at The Preserve, and March 20 at MountainView. Mary Kay shot net scores of 74 and 62, for a total net score of 136. Runners up, both with net scores of 137, were Judy Grow, Weekly Events Co-Chair, and Linda Schauer, Birdies and Chip-Ins Ad Hoc Chair. Mary Kay became an active member of MPWGA four years ago when she and husband Dan retired and moved from Ogden, Utah and served as Sponsorship Chair for two years, and currently co-chairs the Weekly Events Committee. She is known for her easy smile, long drives, “who only knows where that second shot goes,” and putts that find their way right to the grand old flag.

Earlier this year when rooting around for her own ball up in the javelina highlands at The Preserve, Mary Kay found a ball that she had been saving for a very special occasion. It was a red, white and blue Callaway, a commemoration of the American Ryder Cup ball. It just goes to show, that good things, and good golf, come to those who wait, and the very special occasion waiting for that belle of a ball was day two. Mary Kay was one of eight in the Ronald Reagan flight, so in the spirit of the words of our 40th President, “Life is one grand sweet song, so start the music,” Mary Kay teed up that bespangled bombshell and let her rip.

The other ladies in her foursome, Ann Van Sickel, Dianne Anderson and Cathy Quesnell, in awe of Mary Kay’s exemplary play and low score for 16 straight holes were wondering – how does she do it hole after hole after hole? But on MV No. 14, the homestretch and 17th hole of the day, Mary Kay’s long drive hooked so far out of sight into the arid unknown that it stunned the others into seeing all 50 five-pointed white stars. When the eerie silence that seemed to last forever finally broke, the gals sped off, searching through desert brush, bramble and briar to find that ball within the three minutes allowed by the new USGA rules. Just in the nick of time, “Kudos Cathy” spied that little tri-colored tease nestled up to the side of the cart path, looking cute as a button. Mary Kay took out a Desert Dweller’s most valuable of all 14 clubs – a ravaged, rickety old relic – her Rock Club. The cart path took a beating, but Mary Kay’s brummagem ball redeemed herself by landing back in the fairway, cooperating with a chip up to the dance floor, and doing the putter two-step to bag a bogey.

Mary Kay was presented with a crystal vase at the awards luncheon which she will use to showcase this glory ball. The best thing about winning the championship for Mary Kay was that it showed her she is capable of the kind of golf she played on day two. We thank Ann Van Sickel, President’s Cup Special Events Chair, and 2018 Champion, for her hard work in organizing this spectacular day. And, we know we will be seeing Mary Kay again next year, because, by tradition, the reigning Champion has both the honor and the duty to plan the event the following year. The MPWGA President’s Cup is a great opportunity to don patriotic colors and to make America golf great again!