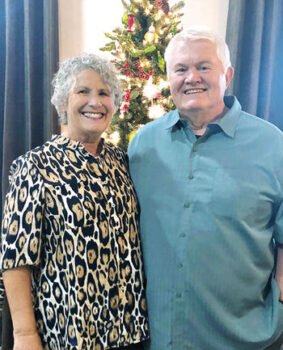 The Community Church at SaddleBrooke (CCSB) welcomed Roger Simmons as their pastor of Care Ministries, effective June 1. When Les French announced his retirement, Senior Pastor Ron Gannett immediately called Roger to discuss how he could become a part of what God is doing at CCSB. Pastor Ron and Roger quickly agreed that the Care Pastor position was a perfect fit for Roger. As Care Pastor, he will be responsible for organizing the congregation to care for each other and will provide leadership for ministries focused on assimilating and connecting the church membership. These ministries include the In Touch Ministry, assuring meaningful contacts with all members of the congregation; hospital equipment loans, open to all SaddleBrooke residents; Prayer Team Ministry; hospital and home visitation; and Grief Share Ministry. He will also be involved in all aspects of setting up the church services.

Roger and his wife, Karen, moved to SaddleBrooke from Colorado Springs via Chandler in 2019 and joined Community Church shortly afterwards. Roger and Karen met in England when Roger was stationed there with the USAF. While in the Air Force, they moved quite often, to three overseas countries and five different states. They’ve been married for 48 years and have three children and five grandchildren.

During his career in the Air Force, Roger felt God leading him to become a pastor and stepped out in faith. Roger has served on the staff of several churches in Germany and the USA. For eight years, he was the executive pastor at Woodmen Valley Chapel in Colorado Springs. He then served as the vice president of ministries at International Students, a ministry designed to share Christ with international students coming to the U.S. to study at our colleges and universities, and as COO at Children’s HopeChest, a ministry for orphaned children in Russia and Romania. Karen also has been active in ministry, serving in the children’s ministries in their churches, and she currently serves on the Fellowship Committee at Community Church. Roger and Karen are enjoying all SaddleBrooke has to offer.