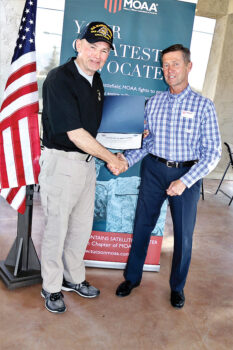 The Catalina Mountain Satellite Chapter (CMSC) of the Military Officers Association of America (MOAA) held its March Meeting on Saturday, March 20. The meeting began with a short business session presided over by Col. Bill Nagy, President, during which members were updated on the chapter’s current and future activities.

The day’s speaker was retired U.S. Army Command Sergeant Major (CSM) Paul Belanger. CSM Belanger had a diverse military career including active duty as a U.S. Marine Corps Officer from 1971 to 1975 and reserve service for another eight years. He initially served as a trained aviator and following the end of the Vietnam War as an infantry company commander.

Following a few years as a full-time civilian, in 1987 CSM Belanger enlisted in the Nevada National Guard as a helicopter crew chief and then enlisted in the U.S. Army Reserve.

Paul reviewed his military career, focusing on his time in Iraq and Afghanistan. He also presented statistics showing the importance of National Guard and Reserve Forces in today’s military composition and deployment.

The April meeting will be held at 3:30 p.m. on Saturday, April 17, on the patio at the SaddleBrooke One Tennis Center. This will be the last meeting until October. The Tennis Center location provides an open-air venue, which meets current COVID-19 safety guidelines. With the availability of sun screening and overhead fans, the patio is a perfect place to meet for the attendees. Masks and social distancing guidelines are to be followed. No food or drink will be available, although participants may bring their own water bottle or cup to use with the ice and water available at the Tennis Center.

The Catalina Mountains Satellite Chapter is part of Tucson Chapter of MOAA, and encompasses Northwest Tucson including Catalina, Oracle, parts of Oro Valley and Marana, SaddleBrooke, SaddleBrooke Ranch, and Sun City. For additional MOAA information, contact Col. Bill Nagy at [email protected] or on our website at www.tucsonmoaa.com. The Military Officers Association of America is a non-profit veteran’s association dedicated to maintaining a strong national defense and to preserve the earned entitlements of members of the uniformed services and their families and survivors.